'Nehawu is not prepared to allow our members and frontline health workers in general to be sacrificed in the name of austerity,' said general secretary Zola Saphetha. 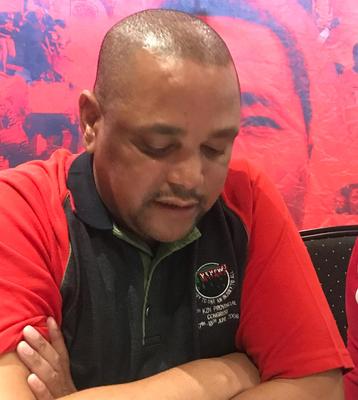 Nehawu general secretary Zola Saphetha said the decision was taken following numerous reports from different workplaces in the provinces and health districts about the situation.

He said healthcare workers paint a very bleak picture of a looming disaster as a result of government’s failure to develop and implement a budgeted and comprehensive roll-out plan, especially for the provision of personal protective equipment (PPE) and sanitisers.

Saphetha added that the union has made several attempts to meet and discuss the dire conditions faced by frontline workers, but to no avail.

The union said it had even approached government’s National Nerve Centre to mitigate the situation.

Some of their concerns are:

“Without a large-scale related programme that ensures that more quarantine beds and ventilators are available, that community members arriving at healthcare centres are screened, tested and there are well-protected teams embarking on contact tracing, our frontline workers and the healthcare centres themselves will eventually be overwhelmed by the spike in infections and the number of sick,” he said.

On Tuesday, the DA in Mpumalanga said basic supplies, including intravenous fluids and basic medicines recommended for mitigating and treating the complications of Covid-19 were allegedly in short supply at Rob Ferreira Hospital in Mbombela.

In their statement, the DA said they were inundated with calls from healthcare workers. The party alleged that there was a lack of training of clinical managers and medical personnel in various hospitals with regards to Covid-19.

Saphetha said: “According to the guidelines on the management of the coronavirus in the public service, provinces were expected to fend for themselves, through ‘budget reprioritisation’ from their already reduced budgets, in the face of this catastrophic scourge.

“Nehawu is not prepared to allow our members and frontline health workers in general to be sacrificed in the name of austerity.”

The union said that through its investment arm it had managed to secure PPE such as testing kits, masks, gloves, hazmat suits, ventilators and even a pop-up hospital.

Nehawu however said “these items cannot be brought and used without the approval by government, the Department of Health in particular”.

“Nehawu welcomes the announcement by President Cyril Ramaphosa of a mass testing campaign to be done by 10,000 volunteers to be recruited to test people in communities.

“However, we are highly worried about the lack of PPE for these volunteers. If they work without proper protective clothing and sanitisers, they will run the risk of getting infected or spreading the virus as they visit households.”

Elections 2021: SA's voters sentenced to death by yawning
8 hours ago
8 hours ago

Elections 2021: SA's voters sentenced to death by yawning
8 hours ago
8 hours ago