South Africa is averaging at around 200,000 vaccine doses per day. 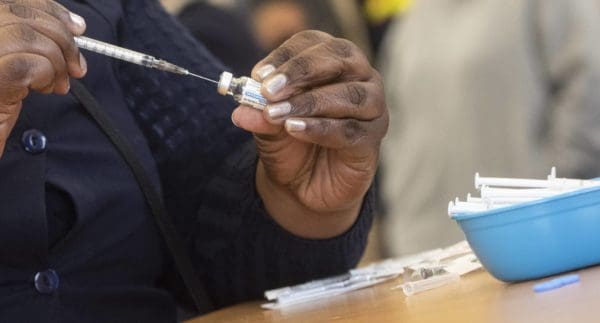 Currently, 19,900,000 doses have been administered. 13.8 million people have received at least one jab, which accounts for 34.6% of the adult population. Picture: Gallo Images/Brenton Geach

By the end of Friday, Department of Health Minister Dr Joe Phaahla vowed that South Africa would cross the 20-million mark of Covid-19 vaccine doses administered since the start of the Sisonke study on 17 February.

This was announced during his weekly Covid vaccination update on Friday morning, in which he said the country’s vaccination programme progress remains stable.

13.8 million people have received at least one jab, which accounts for 34.6% of the adult population.

ALSO READ: 12-17 cohort can get vaccinated from next week, without mom’s permission

Leading the pack in terms of vaccination administration is the Western Cape, with just over 43% of its adult population receiving a jab.

Hot on the heels of the Western Cape are the Eastern Cape, Limpopo and the Free State, who are all close to 40%. It is estimated that by Monday, all three provinces should cross the 40% mark in terms of the amount of vaccines administered.

Gauteng, the most populous of the provinces, has administered over 3.5 million vaccine doses. This accounts for 31.7% of the population. Although a smaller percentage when compared to the above provinces, Phaahla explained that Gauteng currently housed almost one quarter of South Africa’s population.

Phaahla is concerned, however, about the Mpumalanga and KwaZulu-Natal provinces, specifically the latter.

He said for such a large province, vaccine administration coverage was not gaining momentum like other provinces, which negatively affects the national average.

He assured authorities were working with these provinces to ensure that vaccine coverage improves.

There have been some frustrations with the system issuing certificates not responding, or being very slow.

Phaahla said this was due to large numbers of people logging on at peak demand times, which overloaded the system. However, he assured that by the end of October, improvements would have bene made in terms of vaccination certificate access, and certificate security.

He also reminded citizens that this was just the first phase of vaccine certificate issuing.

Any queries can be solved by calling the hotline, at 0800-029-999, or by emailing evdsquiries@health.gov.za.

Healthcare workers, who were the first to receive their vaccines almost eight months ago, have applied with the South African Health Products Regulatory Authority to receive an additional Johnson & Johnson vaccine as a booster shot.

This is due to their high risk of contracting Covid-19.

Crisp said in the public sector, around 77% of healthcare workers have been vaccinated.

The application is being worked on with the South African Medical Research Council, who are expected to give an answer “soon”, according to the department’s director-general, Dr Nicholas Crisp.

People with compromised immune systems, such as those suffering from autoimmune conditions, receiving treatment for haematological ailments, or are on renal dialysis, to name a few, can also expect to receive a booster shot.

Phaahla explained that this would only be done should a referral from a medical practitioner be received.

ALSO READ: TB deaths on the rise again globally due to Covid-19 – WHO

He said a third dose would reinforce these people’s compromised immune systems.

If they have received a J&J shot initially, they should receive a second dose of this vaccine, but if they initially got two Pfizer jabs, they should be given a third dose.

A number of pilot projects are currently running to address the issue of administering vaccinations to undocumented foreigners residing in South Africa.

There are some issues when it comes to migrants getting the vaccine, however, including the lack of a valid ID document, IDs possibly being issued by the health department instead of through home affairs regarding the vaccination system, and where to vaccinate.

Only selected sites will be used, but problems for marginalised groups are different in each region. The country’s current vaccination verification system is also not yet geared to offer widespread support, Crisp explained.

Chief director of the health department and national electronic vaccination data system (EVDS) project manager, Milani Wolamarans, explained that three pilots were running t the moment, in eThekwini, the City of Cape Town and in Tshwane.

Work will be scaled up over the next two weeks, while work on at least one vaccination site will begin, ideally where there is a high concentration of undocumented people.

A staggered approach is needed, she added.

Wolmarans said if a person has lost their ID, an affidavit completed at a police station, should the person know their ID number, will suffice in terms of capturing information on the EVDS.

It is also recommended that people try to get a temporary ID document from home affairs.

These people must receive one dose of the Pfizer vaccine in order to get a vaccine certificate in South Africa.

They must also bring a record of the vaccination they received before, in order to confirm that both a dose of the previous vaccine, and one Pfizer vaccine, have been received.