It turns out that for the US president, being bigger, stronger and tougher is not always the way to go. 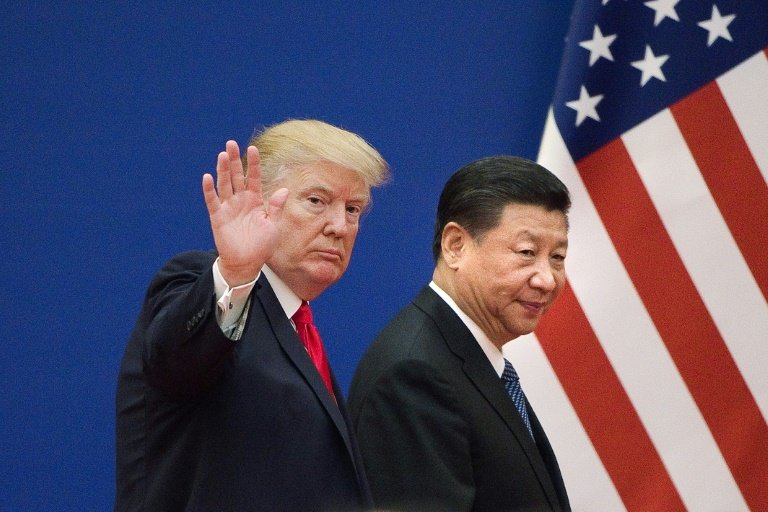 United States President Donald Trump loves competition. He constantly talks about being bigger, stronger and tougher than opponents. And he wants to “Make America Great Again”.

But Trump is begging for a weaker dollar. Less powerful. Not as valuable as foreign currencies. When the dollar is down, the US economy sees some benefits – as American goods are less expensive to buy abroad.

Higher exports can boost production at firms domestically and create more jobs – both of which are political rocket fuel for a president seeking re-election in 2020.

Trump believes the US should match efforts by other countries to increase their own exports by weakening their currencies.

This week, after Beijing let the yuan slide below the seven-per-dollar-mark, the US Treasury Department labelled China a currency “manipulator” – accusing it of weakening the yuan to gain an unfair trade advantage.

The Treasury said the People’s Bank of China exercises too much control over exchange rates.

Markets tanked, fearing the US-China  trade war may be shifting gears into a currency war.

The tension sparked renewed speculation that Trump might order sales of the US dollar, which is near a multi-decade high.

The International Monetary Fund says the  US dollar is about six percent stronger than implied by economic fundamentals.

Yet, on Friday, Trump said he had no plans for direct intervention to weaken the dollar.

“We have the safest currency in the world,” Trump told White House reporters as he was heading to a fundraiser in the Hamptons seaside resort area east of New York City.

“We have the standard of the world.”

But the almighty dollar could lose value in a few different scenarios.

‘Timing is wrong’ Stan Shipley, a macro research analyst at Evercore ISI, told Al Jazeera that currency meddling would be “irresponsible” because it could invite retaliatory measures from other countries and endanger the dollar’s status, sparking more turmoil in the markets.

“This isn’t 2017 and 2018, when the economy was in pretty good shape here and abroad,” Shipley told Al Jazeera.

Bilateral talks have failed to cool the rising temperature of the US trade war with China.

Shipley said flooding the world market with dollars – which is one way to weaken the currency – would make little sense. For one, the dollar is the world’s reserve currency. That brings tremendous advantages, such as lower relative borrowing costs and less exchange-rate risk. Moreover, with US economic growth already slowing, fiscal and monetary policy could depress the value of the dollar by swelling the deficit and prompting the Federal Reserve to cut interest rates more than expected.

Trump continues to rail against the Fed for not lowering interest rates quickly or deeply enough, lamenting that higher rates hold back growth and contribute to the dollar’s overvaluation.

But while signs point to the Fed slashing lending costs again when it meets next month – after making an initial July cut of 25 basis points – lower rates probably may not weaken the dollar to a level that satisfies Trump.

It is unclear whether the Trump administration could even pull down the dollar considerably without real help from the US central bank – which, despite Twitter blasts by the president, operates independently of him.

To ding the dollar, the US Treasury could sell the greenback and buy foreign currency, exchanging dollars that it keeps on reserve.

Most of the $126bn in reserves are held in the Exchange Stabilization Fund (ESF), though US Treasury Secretary Steven Mnuchin has suggested the ESF is not a viable option for dollar devaluation. And if future intervention by Washington unleashes a currency war, ESF funds are not enough to win.

“There are plenty of hedge funds that have more clout than [the ESF],” said Paul Ashworth, an economist at Capital Economics. In comparison, China alone has $3.1 trillion in reserves. Plus, around $5 trillion are traded on global currency markets every day. Partly because the yuan isn’t widely available on currency markets, the US faces difficulty in buying enough yuan to drive up the value of China’s currency against the dollar.

Since the US Treasury uses the Federal Reserve as its agent in financial markets, the two agencies must coordinate to execute an intervention. To pull one off, the Treasury could ask the Fed to create limitless dollars to sell. But to do that, Trump would need to ask Congress to raise the limit on the Treasury’s borrowing authority, allowing his administration to raise more cash to buy foreign currencies.

“If you get rid of the debt ceiling, it’s clear the US would win in a currency war,” said Joseph Gagnon, a fellow at the Peterson Institute for International Economics.

Selling off dollars is one way to bring down the value of the greenback. Another way is to reduce demand for US currency by imposing capital controls.

This was proposed in bipartisan legislation by Senators Tammy Baldwin, a Democrat from Wisconsin, and Josh Hawley, a Republican from Missouri.

Wall Street could react badly to such “speed bumps” in capital markets.

Who opposes US currency manipulation?

Not everyone in the Trump administration supports the idea of an intervention to weaken the dollar. In a July 26 White House meeting, anti-interventionists Mnuchin and Larry Kudlow, the chief economic adviser, squared off against hardliner Peter Navarro, the president’s trade guru. Tomas Philipson, Trump’s acting top economist, called for the US to steer clear of market forces and avoid intervention. The president seems to be heeding that advice – for now.

In any event, because the Fed’s priorities are not the same as the president’s, earning the central bank’s endorsement for an intervention would pose many challenges. The Fed sets interest rates to promote stable prices and full employment, while Trump wants to maximise growth, boost manufacturing and reach his “America First” goals in struggles with China and other nations.

That being said, a weaker dollar would of course make imports more expensive, help balance the trade deficit, and aid the Fed in pushing inflation up towards its two-percent annual target rate.

Regardless, currency intervention would violate a pact between finance ministers and central bankers from the world’s biggest economies, who agreed in 2013 to avoid using exchange rate targets to meet economic objectives.

The Fed prefers to work with – not alienate – the Bank of Japan and European Central Bank (ECB). Even with a mint that never runs out of ink, Washington cannot dictate the value of the dollar – which reflects the overall strength of the US economy and the attractiveness of US assets compared with those elsewhere.

One major reason underlying the dollar’s strength is the relative weakness of Europe’s economy, which has driven the ECB to keep interest rates low. And with investors’ aversion to risky assets growing as trade tensions rise, the dollar has strengthened even more.

For the sake of a stable dollar, working with international partners to compel China to adjust its currency may be the most palatable approach. But the US needs leverage to wage that battle. The Trump administration may settle for “jawboning” the dollar on television and Twitter, trashing China’s moves.

“China’s recent devaluation is relatively small in the whole scheme of things,” said Behravesh. “If it stops there, and neither the US nor China take any other actions that would give markets a fit, then this episode will probably blow over.”

But, he added, “If this is the beginning of a new and dangerous phase of the trade war, then all bets are off.”

Shunned by western countries over Omicron, Africa gets a boost from China
18 hours ago
18 hours ago

Shunned by western countries over Omicron, Africa gets a boost from China
18 hours ago
18 hours ago