A video shot from inside the aircraft showed the right engine ablaze and wobbling on the wing of the Boeing 777-200, its cover entirely missing. 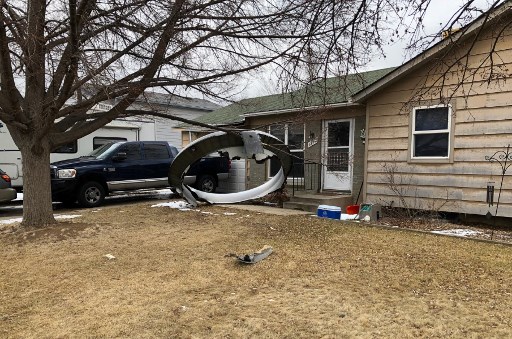 A United Airlines plane suffered a fiery engine failure Saturday shortly after taking off from Denver for Hawaii, dropping massive debris on a residential area before a safe emergency landing, officials said.

Flight UA328 from Denver to Honolulu experienced an engine failure shortly after departure, returned safely to Denver and was met by emergency crews as a precaution. There are no reported injuries onboard. We are in contact with the FAA, NTSB and local law enforcement.

A video shot from inside the aircraft — which had 231 passengers and 10 crew onboard — showed the right engine ablaze and wobbling on the wing of the Boeing 777-200, its cover entirely missing as the aircraft flew over a barren landscape.

There were no injuries on the plane or on the ground, authorities said.

It made an emergency landing and everyone is ok.

Check out these pieces of the engine falling from the sky…pic.twitter.com/1IyBj6Nlf2

“I can honestly say I thought we were going to die at one point — because we started dropping altitude right after the explosion,” passenger David Delucia told The Denver Post.

Delucia said his stepdaughter tweeted the online video, which was shot by another passenger.

“Flight UA328 from Denver to Honolulu experienced an engine failure shortly after departure, returned safely to Denver and was met by emergency crews as a precaution,” United Airlines said in a statement.

“The majority of customers originally on UA328 are currently on their way to Honolulu on a new flight,” it added, saying those who did not wish to travel immediately had been provided with hotel accommodation.

In a recording of the distress call obtained from the website LiveATC, which broadcasts air traffic communications, the pilot requested emergency permission to turn back to Denver.

“Mayday, aircraft, uh, just experienced engine failure,” he said, after the tower asked him to repeat himself. “Need a turn immediately.”

Meanwhile, residents in the Denver suburb of Broomfield found large pieces of the plane scattered around their community, including a giant circular piece of metal that landed in the yard of Kirby Klements. 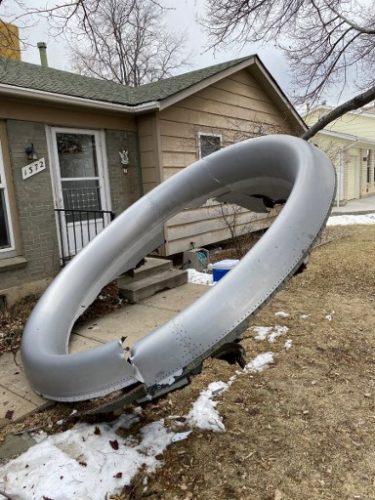 “It was a little overwhelming,” he told CNN.

“It landed square on top of my truck and fell off,” he said, reporting that a separate large piece of debris had put a five-foot (1.5-meter) hole in a neighbour’s roof. 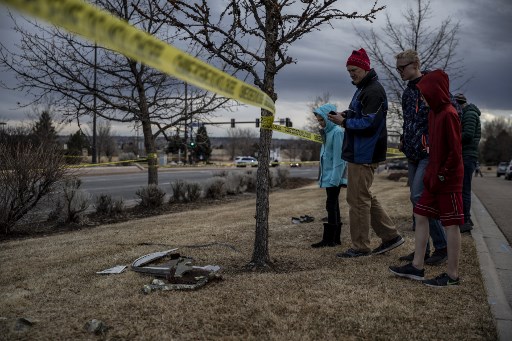 Residents inspect damage from debris fallen from a United Airlines airplane’s engine in the neighborhood of Broomfield, outside Denver, Colorado, on February 20, 2021. (Photo by Chet Strange / AFP)

The Federal Aviation Administration said it was “aware of reports of debris in the vicinity of the airplane’s flight path,” adding that the agency and the National Transportation Safety Board would be investigating the incident.

“If you find debris PLEASE don’t touch it or move it. The @NTSB wants all debris to remain in place for investigation,” Bloomfield police tweeted. 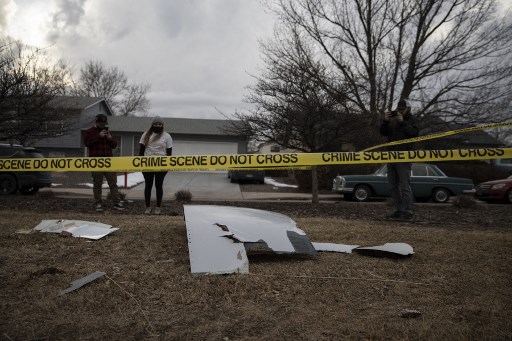 Residents take pictures of debris fallen from a United Airlines airplane’s engine on the neighborhood of Broomfield, outside Denver, Colorado, on February 20, 2021 (Photo by Chet Strange / AFP) 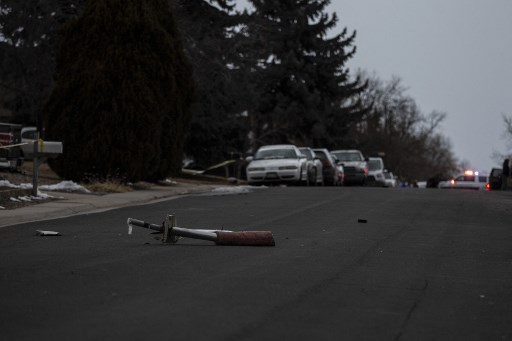 Debris fallen from a United Airlines airplane’s engine lay scattered through the neighborhood of Broomfield, outside Denver, Colorado, on February 20, 2021. (Photo by Chet Strange / AFP)

It posted photos of debris scattered across a sports field at a park, including one piece of the plane with a warning message painted in red: “Stand clear of hazard areas while engine is running.”

United said it would “continue to work with federal agencies investigating this incident.”

Heather Solar was running a practice at the park for her girls’ soccer team when she said she heard an explosion, following by debris raining down.

“Honestly, what I thought it was at first… I thought we were being bombed,” Solar told The Denver Post. “There was so much debris in the sky.”