Hundreds defied coronavirus restrictions to mark the death of Sarah Everard, who went missing nearby and was later found dead. 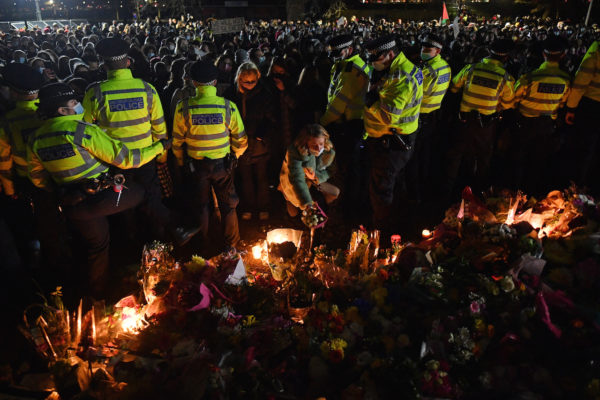 A well-wisher places a adds a tribute to the growing pile from a gap in a police cordon at the band-stand where a planned vigil in honour of alleged murder victim Sarah Everard, which was officially cancelled due to Covid-19 restrictions, was to take place on Clapham Common, south London on March 13, 2021. (Photo by JUSTIN TALLIS / AFP)

London’s Metropolitan Police on Sunday defended its handling of a high-profile protest calling for greater public safety for women, after male officers were seen scuffling with the crowd and physically restraining female demonstrators.

Hundreds defied coronavirus restrictions on Saturday night to gather on Clapham Common park to mark the death of Sarah Everard, who went missing nearby as she walked home earlier this month.

The 33-year-old marketing executive was later found dead. A serving police officer with the London force has since been charged with her kidnap and murder.

But widely shared footage of uniformed police officers restraining and handcuffing some women marking Everard’s death with a candlelit tribute has triggered outrage.

Protest organisers Reclaim These Streets condemned the actions of officers “physically manhandling women at a vigil against male violence”.

But one of Dick’s deputies, Helen Ball, said police, who had refused permission for the vigil to take place, “must act for people’s safety”.

“Hundreds of people were packed tightly together, posing a very real risk of easily transmitting Covid-19” she added in a statement early Sunday — Mother’s Day in Britain.

“We absolutely did not want to be in a position where enforcement action was necessary. But we were placed in this position because of the overriding need to protect people’s safety.”

Four arrests were made for public order offences and for breaches of coronavirus regulations, the force said.

Everard’s disappearance, and the huge search to find her, has renewed attention on women’s safety in public places and the issue of male violence.

She had visited friends in Clapham and was returning home to Brixton, about 50 minutes walk away, when she disappeared around 9:30 pm on March 3.

Her body was found this week in Kent, southeast England.

Thousands of women have shared their stories online about the safety precautions they have to take on a daily basis, and their experience of intimidation, harassment and assault by men.

The Guardian columnist Marina Hyde on Friday wrote how she was followed and verbally abused by a man as she went to pick up her young son from school.

“What happened to me was nothing — the nothing women know all too well,” she said, highlighting how the issue was so widespread.

Tensions and mounting anger spilled over at Clapham Common on Saturday night, where the park’s bandstand has turned into a floral shrine for Everard.

Earlier Saturday, Prince William’s wife, Kate, visited the scene, while across the country candles were lit on doorsteps as a mark of respect.

“She remembers what it was like to walk around London at night before she was married to Prince William,” the Sunday Mirror quoted an unnamed royal source as saying.

Prime Minister Boris Johnson, who left a lantern outside the door of his 10 Downing Street office and residence, promised action.

“I will do everything I can to make sure the streets are safe and ensure women and girls do not face harassment or abuse,” he tweeted.

But the police action to disperse the crowds has done little to calm public anger. Protesters shouted “shame on you” as officers took people away.

“(The) Met mishandled vigil plan from the outset,” added Harriet Harman, who was women’s minister in Tony Blair’s government.

“They should have reached agreement,” she tweeted.

Caroline Nokes, who chairs parliament’s women and equalities committee, said: “In this country we police by consent, not by trampling the tributes and dragging women.”

'Show us the virus,' say anti-vaxx protesters, 21 months after world saw virus
20 hours ago
20 hours ago

'Show us the virus,' say anti-vaxx protesters, 21 months after world saw virus
20 hours ago
20 hours ago