Mohammed Khalifa, 38 and born in Saudi Arabia, was captured during a firefight in January 2019. 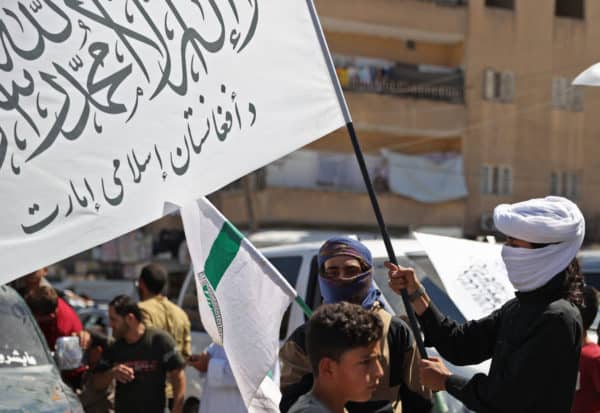 Members of Syria's top jihadist group the Hayat Tahrir al-Sham (HTS) alliance, led by al-Qaeda's former Syria affiliate, parade with their flags and those of the Taliban's declared "Islamic Emirate of Afghanistan" through the rebel-held northwestern city of Idlib on August 20, 2021. - The armed group that formally broke ties with al-Qaeda years ago is considered to be the most prominent jihadist group in Syria after a decade of war. HTS controls nearly half of the Idlib region -- the last remaining opposition bastion in Syria -- alongside other less influential groups. (Photo by OMAR HAJ KADOUR / AFP)

A Canadian jihadist who fought for the Islamic State group and narrated violent propaganda videos has been taken into custody by the United States and charged, the Justice Department said Saturday.

Mohammed Khalifa, 38 and born in Saudi Arabia, was captured during a firefight in January 2019 by Kurdish-dominated Syrian forces allied with the US.

He was handed over “recently” to US authorities and charged in Virginia with conspiring to provide material support to IS resulting in death, says a Justice Department statement.

It says he left Canada in 2013 to join the Islamic State group in Syria and by the next year had become a key member of its propaganda team because of his fluent English and Arabic.

This cell was behind videos showing the beheadings of foreigners including the US journalists James Foley and Steven Sotloff, who died in 2014.

In an exchange of emails cited in the charge sheet, Khalifa defended these killings.

“Mohammed Khalifa not only fought for ISIS on the battlefield in Syria, but he was also the voice behind the violence,” said Acting US Attorney Raj Parekh for the Eastern District of Virginia, using another acronym for the Islamic State group.

“Through his alleged leading role in translating, narrating, and advancing ISIS’s online propaganda, Khalifa promoted the terrorist group, furthered its worldwide recruitment efforts, and expanded the reach of videos that glorified the horrific murders and indiscriminate cruelty of ISIS,” Parekh said.

This is the first known indictment of a foreign IS fighter in America since Joe Biden took power in January.