In Germany, eighteen elderly tourists from Saxony died when their tour bus catches fire after colliding with a truck in Bavaria on July 3, 2018. 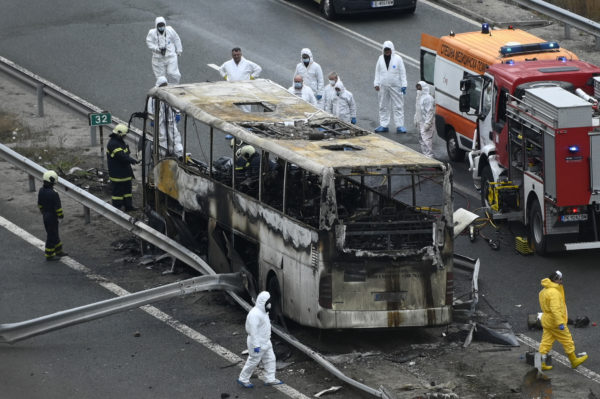 Officials work at the site of a bus accident, in which at least 46 people were killed, on a highway near the village of Bosnek, south of Sofia, on November 23, 2021. - 46 people, including a dozen minors, were killed after a bus caught fire south of the Bulgarian capital early on November 23, 2021, officials said, in the country's deadliest road accident in years. (Photo by Nikolay DOYCHINOV / AFP)

As at least 46 people die in Bulgaria in the worst bus accident in Europe in a decade, we look at similar tragedies on the continent over the last 10 years.

At least 46 people, including 12 minors, die when a bus bound for the North Macedonian capital of Skopje from Istanbul bursts into flames in Bulgaria early Tuesday. Most of its passengers are reportedly from Macedonia’s Albanian minority.

NORTH MACEDONIA: The Balkan country declares two days of national mourning as 16 die and 37 are injured when a bus travelling between the capital Skopje and mainly Albanian Tetovo rolls over on February 13.

PORTUGAL: Twenty-nine German tourists die when their bus goes off the road on its way to a restaurant on the mountainous island of Madeira on April 17.

RUSSIA: A bus plunges off a bridge into a frozen river in Siberia on December 1, killing 19 people.

TURKEY: Seventeen migrants being smuggled through Turkey die and 36 are injured when their bus bursts into flames after hitting a pole on March 29 near Kars in the east of the country. Most were Iranians, Afghans and Pakistanis.

BULGARIA: Twenty pilgrims die after their bus flips over in heavy rain north of Sofia on a trip to an Orthodox monastery on August 25.

GERMANY: Eighteen elderly tourists from Saxony die when their tour bus catches fire after colliding with a truck in Bavaria on July 3.

ITALY: Sixteen people — mostly Hungarian teenagers returning from a ski trip to France — die on January 21 when their bus ignites after crashing near the northern city of Verona.

TURKEY: At least 23 people die and 11 more are seriously injured when a bus carrying women and children plunges off a cliff near the southwestern Turkish resort of Marmaris on May 13.

RUSSIA: At least 17 workers die when their bus plunges from a jetty into the Black Sea on the Taman peninsula near Crimea on August 25.

Sixteen people die when a train slams into a broken down bus carrying mostly Uzbek passengers on a level crossing east of Moscow on October 6.

FRANCE: In the worst French road accident in three decades, 43 people die when a bus carrying a pensioners’ club collides with a truck and catches fire near Puisseguin in southwest of the country on October 23.

TURKEY: A tanker carrying liquefied petroleum gas (LPG) overturns and explodes on a highway in the southeast on July 22, killing 26 people in two passing buses that were engulfed in flames.

Twenty-one people die in central Turkey on January 23 when their bus overturns on icy roads at night.

MONTENEGRO: Eighteen Romanians are killed and 31 others hurt when their bus skids off a windy mountain road in Montenegro on June 23 and falls into a ravine.

RUSSIA: Eighteen also perished when a truck crashed into a bus near Moscow on July 13, cutting it in half.

SWITZERLAND: Twenty-eight people, including 22 children, die in a crash in Sierre, southern Switzerland, as they return to Belgium from a skiing holiday on March 13.

TURKEY: Twenty-five people, mainly students, are killed when a truck loaded with bricks collides with a bus near Salat, a village in the southeastern Diyarbakir province on December 21.