Symbolically, her outfit includes a sapphire brooch she wore on her honeymoon and at their diamond wedding anniversary. 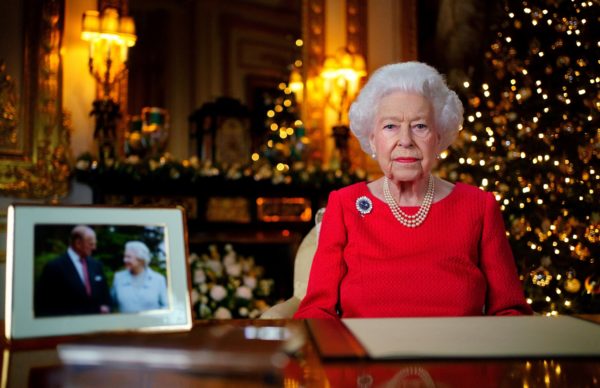 A picture released on December 23, 2021 shows Britain's Queen Elizabeth II posing for a photograph as she recorded her annual Christmas Day message, with a photograph of herself and her late husband Britain's Prince Philip, Duke of Edinburgh, taken in 2007 at Broadlands. Picture: AFP

Queen Elizabeth II paid a touching tribute to her late husband Prince Philip in her Christmas Day message as she marked the holiday with a family gathering.

In the unusually personal message broadcast at 1500 GMT, the 95-year-old monarch said that she and her family were missing the Duke of Edinburgh, who died at 99 in April.

Wearing a red dress and pearls, the Queen spoke while sitting at a table with a single photograph of her with Philip, taken in 2007 for their 60th (diamond) wedding anniversary.

“Christmas can be hard for those who have lost loved ones. This year especially I understand why,” said the Queen, who was married for 73 years.

Symbolically, her outfit includes a sapphire brooch she wore on her honeymoon and at their diamond wedding anniversary.

Buckingham Palace this week announced a memorial service would be held for Philip at Westminster Abbey in the spring, after only 30 people could attend his funeral due to social distancing rules and the Queen sat alone in a pew.

The Queen reminisced fondly about the prince, saying his “sense of service, intellectual curiosity and capacity to squeeze fun out of any situation were all irrepressible”.

“That mischievous inquiring twinkle was as bright at the end as when I first set eyes on him,” she added.

The royal family will be celebrating Christmas with “one familiar laugh missing this year,” she said.

But “as much as I and my family miss him, I know he would want us to enjoy Christmas.”

She also acknowledged the impact of the virus, saying that this year “Covid again means we can’t celebrate quite as we would have wished”.

The Queen cancelled her usual trip to her Sandringham estate in eastern England as a precautionary measure, instead staying at Windsor Castle west of London.

She also decided against attending the traditional Christmas Morning service at the castle’s St George’s Chapel, though the rest of the family were present.

The Queen’s daughter Princess Anne is in self-isolation after her husband tested positive for coronavirus, but the monarch’s eldest son and the heir to the throne, Prince Charles, and his wife Camilla are to visit on Christmas Day.

The Sun reported that 16 family members would join the Queen for Christmas, while her grandson Prince William will stay in Norfolk with his family.

The Queen said she was “proud beyond words” that Charles and his eldest son William are following in Philip’s footsteps in “taking seriously our stewardship of the environment”.

She added that they were “admirably supported” by their wives, Camilla and Catherine, at the COP26 summit on climate change in Glasgow in November, which the monarch did not attend after health problems led her to spend a night in hospital.

Charles and William and their wives have been stepping up their public roles as the Queen has skipped several major events, including the summit.

The Queen said she was looking forward to her Platinum Jubilee next year, marking 70 years since she acceded to the throne following the death of her father, George VI.

She called this “an opportunity for people everywhere to enjoy a sense of togetherness” and “look ahead with confidence”, while giving thanks for the “enormous changes” during her reign.

Talking of her “great happiness” at the passing of family traditions between generations, the Queen referred to the birth of four great-grandchildren this year – among them, her grandson Prince Harry’s daughter Lillibet, born in June and named after her.

But this was the only allusion to Harry, who with his wife Meghan accused the royals of racism in a sensational interview with US TV presenter Oprah Winfrey in March.

There was also no mention of Prince Andrew, who has been barred from royal appearances over his association with Jeffrey Epstein, the late US financier who was charged with sex crimes.

Andrew was nevertheless expected to spend Christmas with his mother at Windsor, along with his daughters Beatrice and Eugenie, The Sun reported.