Will Putin use chemical or nuclear weapons if he gets desperate?

Western powers are growing increasingly worried that President Vladimir Putin may use chemical weapons or launch a nuclear attack. 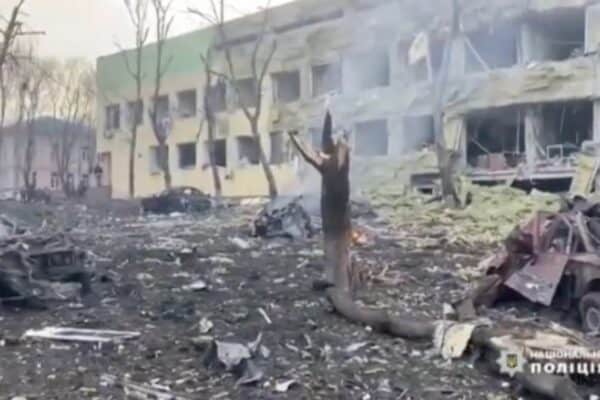 What remains of a children's hospital in Mariupol, after it was bombed by Russian troops. Photo: Twitter/@AFP/screenshot

Vladimir Putin’s predictions of a swift and easy military campaign have been way off base. The Russians have made advancements in various parts of Ukraine but at a great cost.

Russian forces have struggled to encircle key Ukrainian cities such as Kyiv and Mykolaiv, despite numerous offensive strikes at both targets.

“There are clear signs of demoralisation,” said Defense Editor at The Economist, Shashank Joshi.

“They are throwing lots of troops at it and suffering lots of casualties,” he said.

Joshi was addressing a live webinar on the Ukraine invasion hosted by The Economist on Friday.

Russia’s since supplemented its offensive with Chechen soldiers and mercenaries from a Russian private military group.

The Telegraph reports from the front lines suggest Ramzan Kadyrov, Chechnya’s warlord leader, had sent forces into the country and are now occupying villages to the northwest of Kyiv.

The Ukrainian General Staff said mercenaries paid by the Wagner Group, a shadowy private military company, are also now operating on the ground.

But these attacks have come at great cost. US military sources estimate Russia lost between 5,000 to 6,000 soldiers so far.

There have also been reports that a third major general, out of about 20 had been killed this week.

Risk of chemical or nuclear attacks have gone up

Sergey Beseda, head of the FSB’s foreign intelligence branch, and his deputy Anatoly Bolyukh, were arrested.

Experts say this is a sign Putin is seeking to blame the security services for the stalled invasion of Ukraine.

“These two individuals were closely involved in planning the invasion on Ukraine,” said Joshi.

As Russia’s body count piles up, its government has been making false accusations that western and Ukrainian forces have biological and chemical weapons.

If Putin gets desperate…

Joshi said these propaganda messages are making western officials in Washington and the UK increasing worried that Putin might make use of chemical or nuclear weapons if he gets desperate.

“There’s two kinds of risk. One of them is that the war going badly compels Vladimir Putin to use something like chemical weapons,” said Joshi.

“That creates intense pressures on western governments to intervene.”

The second possibility involves a scenario where Putin decides western arm suppliers are problematic; he could then attempt to strike a depot in Poland or hit an arms convoy entering Ukraine.

“Western governments are absolutely keen to stay out of this conflict, but these things could escalate into a Russian-Nato clash and that could spiral into Russian nuclear use which would create pressure for western nuclear use,” explained Joshi.

The Economist’s Russian-European correspondent, Arkady Ostrovsky agreed with Joshi’s assessment saying the risk of Putin using chemical or nuclear weapons has gone up.

“Even though western governments want to stay out of it, as far as Putin is concerned he is already fighting with the west,” said Ostrovsky said.

“He doesn’t see Ukraine as an independent state, as far as he (Putin) is concerned, he is fighting America in Ukraine.”