The EFF wants King Mswati III to step down. 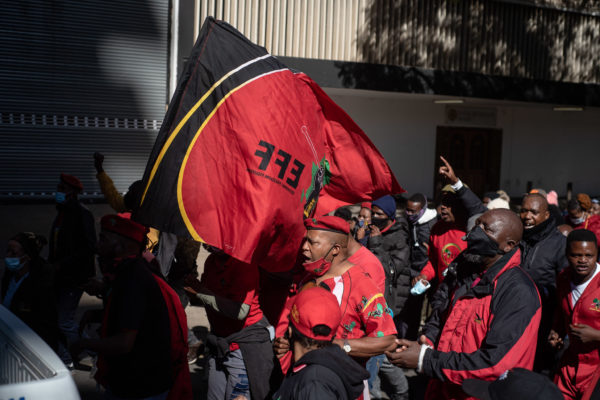 EFF members marching to Tshwane House in the Pretoria CBD where they handed over a memorandum demanding insourcing of security, credit control and waste management workers on 7 June 2021, Pretoria. Picture: Jacques Nelles

Economic Freedom Fighters (EFF) leader Julius Malema says his party will soon march to the borders of Eswatini in solidarity with the pro-democracy protests.

Speaking during a media briefing on Thursday at the Independent Electoral Commission’s (IEC’s) results operations centre in Tshwane, Malema said the EFF is demanding that King Mswati III step down.

“We are going to announce very soon the dates we will occupy all the borders of Swaziland [Eswatini’s former name] because we have spoken about the issue of Swaziland for a very long time. We need to take action now.

“The continent, the region has supported us. The people of Swaziland need us more than ever before. We have to go and block the borders of Swaziland and make sure that Mswati steps down,” the EFF leader said.

Malema said King Mswati should remove himself from being involved in the country’s politics.

“We have no problem of royalty in Swaziland, but let it assume the role of the Zulu royalty or any other royalty in South Africa. Let them continue as royalty without interfering in the political and economic affairs of Swaziland.

“So, we are going to Swaziland, and the people of Swaziland must not be discouraged. The EFF must keep the fires burning. We will only allow medicine and food to go to Swaziland […] any other thing will not be allowed to pass,” he added.

The EFF leader’s comments come a day after President Cyril Ramaphosa, in his capacity as chairperson of the Southern African Development Community (Sadc), visited Eswatini.

According to the Presidency, Ramaphosa and Mswati held discussions on issues relating to the political and security situation in the country, following weeks of violent clashes between security forces and protesters.

“The deliberations resolved that the kingdom of Eswatini will embark on a process that will work towards the establishment of a national dialogue forum,” the Presidency said in a statement.

The pair called for all stakeholders to work together to end violence and conflict, and maintain peace and calm as work commences on the national dialogue process.

Workers, civil servants and even high-school students took to the streets, clashing with police, to demand direct elections, better pay and the release of two pro-democracy lawmakers arrested in July.

It has been reported that more than 25 people have died during pro-democracy protests in Eswatini.

The EFF previously called on the South African government and African Union (AU) to reign on the king and his family, saying there should be consequences against a government that lifts up arms of war against its civilian population.

Eswatini is ruled by Mswati, which is the last absolute monarch in Africa.

Mswati, who succeeded his father King Sobhuza II in 1986, has been accused of draining public coffers.

The 53-year-old monarch’s annual salary, paid by the government, was last reported at around $60 million.

He holds stakes in Eswatini’s main companies — including one of Africa’s largest sugar producers — and caused uproar in 2019 for allegedly gifting Roll-Royces and BMWs to his 15 wives.