China rejects claims it is trapping Africa in debt

Beijing funded Kenya's most expensive infrastructure project since independence, loaning $5 billion for the construction of a railway line from Mombasa opened in 2017. 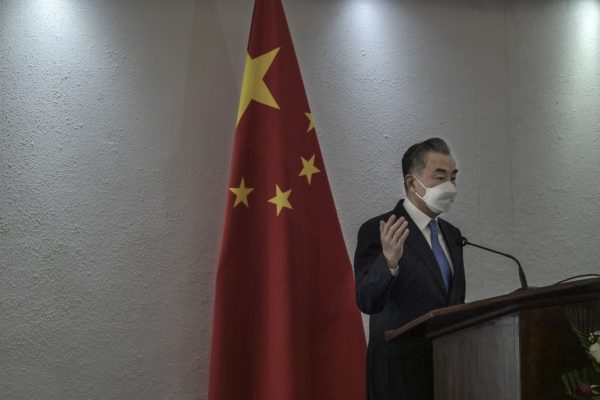 China's Foreign Minister Wang Yi speaks during a joint press conference with his Kenyan counterpart, Raychelle Omamo (not seen) that followed a bilateral meeting at the Sarova Whitesands Hotel in the Kenyan coastal city of Mombasa on January 6, 2022. (Photo by Tony KARUMBA / AFP)

China’s Foreign Minister Wang Yi on Thursday rejected suggestions that Beijing was luring African countries into debt traps by offering them massive loans, dismissing the idea as a “narrative” pushed by opponents to poverty reduction.

Wang, speaking ahead of touring Beijing-funded infrastructure projects in Kenya, said China’s considerable lending to Africa was “mutually benefiting” and not a strategy to extract diplomatic and commercial concessions.

“That is simply not a fact. It is speculation being played out by some with ulterior motives,” he told reporters in the Kenyan port city of Mombasa.

“This is a narrative that has been created by those who do not want to see development in Africa. If there is any trap, it is about poverty and underdevelopment,” he said, speaking through an interpreter.

Wang’s three-nation tour of Eritrea, Kenya and the Comoros follows a trip to Africa by US Secretary of State Antony Blinken in November that in part aimed at countering China’s growing influence on the continent.

China is Africa’s largest trading partner, with direct trade worth over $200 billion (177 billion euros) in 2019, according to official Chinese figures.

China is Kenya’s second-largest lender after the World Bank and has funded a number of costly infrastructure projects that have raised concerns about Nairobi taking on more debt than it can afford.

In Mombasa, Wang held a closed-door meeting with a team of government ministers and signed agreements on trade and investment, health, security, climate change and green technology transfer.

He later met President Uhuru Kenyatta and visited the Port of Mombasa, where China is constructing a new $353 million terminal to allow larger oil tankers to berth.

“The visit is a testament to the deepening of relations between the two countries,” said Kenya’s foreign minister, Raychelle Omamo.

Beijing funded Kenya’s most expensive infrastructure project since independence, loaning $5 billion for the construction of a railway line from Mombasa opened in 2017.

During a visit to Mombasa in January 2020, Wang described the railway as a “benchmark” of China’s Belt and Road Initiative, a trillion-dollar push to improve trade links across the globe by building landmark infrastructure.

But observers have raised red flags over Kenya’s reliance on Chinese funding, warning that debt was soaring to unmanageable levels.

Aly-Khan Satchu, a Kenyan geopolitical and economic analyst, said the East African nation was at a disadvantage negotiating deals and often stuck with high-interest repayments.

“These investments are not going to make a return on investments for the foreseeable future,” he told AFP.

“You have taken out these loans and they are making losses every month. You are essentially increasing the problems.”

Beijing’s lending spree has slowed in recent years as borrowers have pushed back on terms and the coronavirus pandemic has inflicted economic pain.

Satchu said China was shifting focus from infrastructure to greater trade, and saw promise in deepening ties with Indian Ocean economies.   “The Chinese are trying to recalibrate their relationship with Africa, with a lot of emphasis on agriculture and lending to the private sector,” he said.

Wang has already visited Eritrea and after Kenya, heads to the Indian Ocean island nation of the Comoros.