What does it take to keep your job as the NPA boss?

With current man Shaun Abrahams in the firing line, the answer is probably that no one knows any more, least of all Zuma. 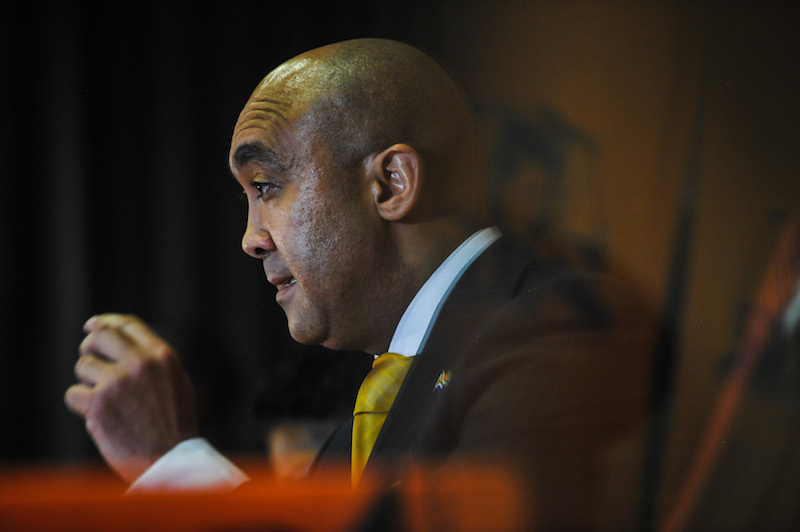 President Jacob Zuma has written to National Prosecuting Authority (NPA) boss Advocate Shaun Abrahams requesting him to give reasons why he shouldn’t be suspended from office, pending legal action by two civil society organisations calling for a judiciary inquiry into his fitness to hold office.

It once again raises serious questions about the stability of the public prosecutions body.

For almost a decade the NPA has waded through leadership instability and political meddling from the country’s governing African National Congress (ANC).

Abrahams’ appointment in June last year following the controversy surrounding the suspension and subsequent resignation of Advocate Mxolisi Nxasana, was made by Zuma in swiftness ahead of a high court ruling regarding the president’s corruption charges.

In return, Abrahams has worked tirelessly to oppose the reinstatement of those charges – but perhaps even that won’t be enough to save him.

The NPA as a critical component of South Africa’s criminal justice system in guaranteeing the country’s equality of all before the law has undoubtedly been eroded by scandals; alleged camps aligned to the ANC’s internal factions always interfere, which, as many would say, was aptly demonstrated by the bungled prosecution of Finance Minister Pravin Gordhan.

Former National Director of Public Prosecutions (NDPP) Bulelani Ngcuka’s term was marred by alleged political interference by then president Thabo Mbeki in his bid to strike out his then deputy,  Zuma, ahead of the ANC’s seminal 52nd national elective conference in 2007. It underscored the weaknesses of the NPA in prosecuting the ruling elite without fear or favour, as the preamble of the public body requires it to do.

The organisation continued to weaken under unstable leadership after subsequent NDPP Advocate Vusi Pikoli instituted criminal charges against the now late South African police commissioner Jackie Selebi that saw the Mbeki administration interfering; this despite the former statesman’s recent statements to set “the record straight” regarding his time in office and the conspiracy theories that dogged his presidency.

Ultimately Pikoli faced an inquiry into his fitness to hold office chaired by former National Assembly Speaker Frene Ginwala. His suspension in 2008 set a precedent for the NPA’s future NDPPs to fail to complete their non-renewable 10-year term.

Ten years feels like an awfully long time to survive with the poisoned chalice in hand. Even 10 months looks like a challenge nowadays.

The scandals only continued under subsequent NDPP Advocate Menzi Simelane, whose appointment was declared invalid by the Constitutional Court in October 2012. Simelane’s integrity and credibility were squashed by another arm of SA’s criminal justice system, the final arbiter of cases brought forward by the NPA to make judgments on cases on the assumption that the state will prosecute in good faith and in the public interest.

With a head of state who has been clouded in corruption scandals and numerous legal wrangles seeking to delay his day court, a successful full term by any NDPP under Zuma’s presidency, it could be argued, is near impossible considering the president’s mighty constitutional prerogatives to suspend and fire the head of the NPA as he pleases.

Considering how hard Abrahams has worked to protect Zuma, it’s likely the president won’t fire him. But only a brace man would bet on the future of any NDPP.

His predecessor Nxasana’s days were numbered the moment rumours started swirling that he was never subjected to a security clearance, as national security requires, and questions about his brushes with the law, however flimsy those allegations turned out to be, were exposed.

None of that was the real reason for Nxasana’s problems, of course. He may as well have fired himself the moment he said he was still open to the possibility of prosecuting Zuma. Like his predecessor, Nxasana was booted out of the NPA after Zuma announced a judicial inquiry into his fitness to office. The probe, which would have been most interesting, eventually didn’t even happen in the face of Nxasana’s acceptance of R17 million to just walk away.

This month Business Day reported that Nxasana wants his job back should a legal challenge by anti-graft organisations Corruption Watch and Freedom Under Law succeed in getting the courts to declare Zuma’s controversial golden handshake for him null and void.

The daily also confirmed what we all already know: that Nxasana thinks he was pushed out of the NPA by Zuma’s camp because they suspected he would reinstate the more than 700 charges of corruption against Zuma – to the delight of the opposition constantly baying for Zuma’s blood.

If that wasn’t enough, the NPA’s now suspended senior leaders, Advocates Nomgcobo Jiba and Lawrence Mrwebi, were struck of the roll of Advocates by the Pretoria High Court and the General Council of the Bar of SA for not being “fit and proper” for their jobs.

The deputy NDPP and special director of public prosecutions, respectively, were criticised for lying and misleading the country’s judiciary.

“This kind of behavior diminishes the image of the country and its institutions which are meant to be impartial and independent,” said the court in condemnation of the prosecutors.

Abrahams is now facing the prospect of a possible suspension, with yet another commission of inquiry looming after the failed and politically charged prosecution of Gordhan and two former SA revenue service (Sars) officials.

The chief prosecutor is in Zuma’s firing line and so is the stability and independence of the public prosecutions body – if one could be so naive as to think there’s been such a thing for the past 10 years.

UPDATE: Murder trial of Senzo Meyiwa's alleged killers to begin in April 2022
17 hours ago
17 hours ago

UPDATE: Murder trial of Senzo Meyiwa's alleged killers to begin in April 2022
17 hours ago
17 hours ago