A media responsible for fuelling racial tension must be held accountable

The media must actively work towards creating a climate of freedom of expression and free speech, and even the right to offend. 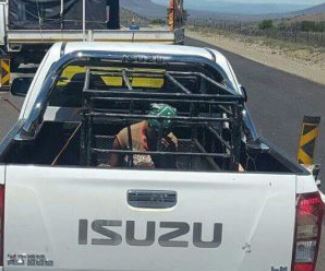 Linda Steenkamp seated in the back of a cage. Image: Twitter.

Race baiting has become a national sport. It’s as though there are appointed vigilantes watching for any sign of racism to pounce on the offender in order to bring him/her down. We have seen many such cases where white people, in particular, have been targeted for either uttering stupid comments or posting inappropriate comments on social media.

It is not as though white people are the only culprits. Black people regularly post and carry banners with equally vulgar racist comments against whites, preambled by the F-word. And for as long as the belief exists within the political sphere that “blacks can’t be racist” such one-sided abuse will continue.

The media has not helped, but has actively contributed to fomenting racism and subjecting “offenders” to ostracism as social outcasts. The picture that surfaced on social media of a black woman in a cage on the back of a bakkie is a case in point.

Before people even made an effort to find out what the story was, the farmer was attacked and verbally, even physically threatened with violence, extending the accusation of racism to all farmers everywhere. The bloodlust was palpable. To quote Ben Hecht: “Trying to determine what is going on in the world by reading newspapers is like trying to tell the time by watching the second hand of a clock.”

The story behind this picture was hardly as politically tantalising as many would have wanted to believe. Here was a woman who needed to attend a clinic some distance from her home, and when offered a lift from the farmer, Johan Schoeman, who drove the truck, she chose to sit at the back.

Grateful for this act of kindness, she wondered what all the fuss was about and made everyone, including the media, feel like utter idiots for politicising an act that was the epitome of kindness.

That racism has been criminalised is quite shocking and, by that standard, there should be few MPs on the bench. They should be in jail. Policing racist comments is tantamount to McCarthyism – “the practice of making unfair allegations or using unfair investigative techniques, especially in order to restrict dissent or political criticism”.

The media must actively work towards creating a climate where freedom of expression and free speech, and even the right to offend, become central to political discourse. That is what a lot of art, poetry and fiction do. Genuflecting at anything and everything that looks racist to the beholder is an illness that has become commonplace in SA. Given our history it is understandable, but not excusable. A media that foments racial tension without good evidence has to be held accountable.

Leta Schoeman, the farmer’s wife, said that they had received lots of threats “but we are not scared, we just assisted someone”. Caution is what I learnt as Human Rights Commissioner. Often we could have destroyed lives but instead we used the route of mediation, conversation and dialogue.

Today that is not true – it is often the other way around.