SA has lost a key line of defence against corruption. What now?

The removal of South Africa's finance minister, Pravin Gordhan, is the greatest threat to public finances experienced in the post-1994 era. 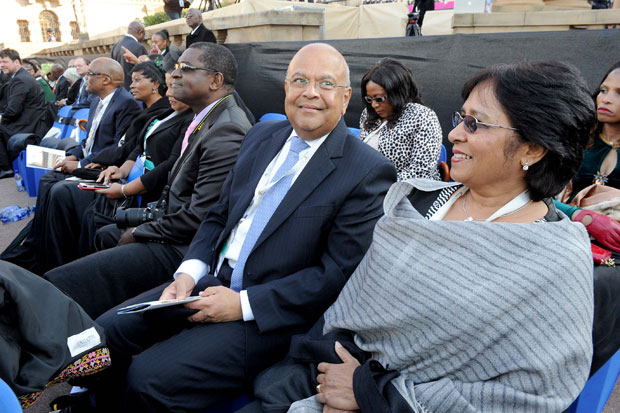 Minister of Finance Pravin Gordhan and his partner at the 2014 Presidential Inauguration in the Nelson Mandela Amphitheatre at the Union Buildings, Pretoria. (Photo: GCIS)

It’s no exaggeration to say that the removal of the finance minister is the greatest threat to public finances experienced in democratic South Africa.

Let’s be clear, the motive for removing the minister and his deputy had nothing to do with the responsible and safe management of South Africa’s economy. Rather it has everything to do with Gordhan and his team’s intent to safeguard the fiscus against irresponsible and corrupt activities. It follows that whoever replaces them will be amenable to facilitating such activities.

It’s hard to overstate the harm that a corrupt finance minister could cause. The first consequence – which became apparent when Nhlanhla Nene was fired and also as speculation mounted about Gordhan’s removal – is based on a simple loss of confidence. This is reflected in the sharp depreciation of the rand before and after Zuma’s announcement.

The rand is likely to suffer further. The cost of government borrowing in the market will rise, further compounding the impact of a formal downgrade by ratings agencies which is likely to follow. Higher borrowing costs will mean less money for expenditure, along with a reduced ability to borrow. Imports will become more expensive, potentially fuelling inflation and a hike in interest rates.

There’s also likely to be an outflow of foreign investment, further exacerbating the weakened exchange rate. At its most extreme this could lead to a balance of payments crisis. All of this will harm already low economic growth.

And there are a number of key decisions – such as the approval of an expensive nuclear deal – that could get the green light, severely damaging the country’s fiscal position.

When Zuma summoned Gordhan back from an investor roadshow in the UK earlier in the week, he is said to have to have acted on the back of a flimsy intelligence report. Few believe this to be the real reason.

Others speculated that Zuma’s reason for making the move now might be linked to court cases involving the Gupta family and their associates, or the manufactured crisis relating to the distribution of social grants.

The court cases relate to attempts by the Guptas to get the executive branch to intervene in the decision of commercial banks to close their bank accounts. They are also linked to an attempt by the Gupta’s associates to purchase a controlling share in an existing bank. There certainly seems to be a sense of urgency, with the last bank servicing Gupta companies reported to have started closing accounts.

But my premise on why this has happened now is much simpler. The timing of it ensures that the new finance minister, and other new appointments, have a month’s grace before a vote of no confidence in parliament can be tabled in parliament. Two opposition parties have already called for one.

A vote of no confidence against Zuma could succeed if the ANC caucus turned on Zuma and ANC members joined opposition parties to make up a 51% majority. There were hints of such a revolt in February ahead of Gordhan’s budget speech. The chances of it actually happening this time are probably much greater.

But an imminent vote isn’t possible because parliament starts its 2017 Easter recess on the 31st of March, and only returns in early May. My reading of the Constitution and the Rules of the National Assembly suggests that recalling parliament before the recess ends will be difficult, if not impossible. That means that in the absence of some other process to block the president’s machinations, his cronies will have a minimum of four weeks to implement whatever nefarious plans they have devised for the finance ministry.

A lot of damage could be done in that time.

Harm that can be done

The consequences of Gordhan’s removal could be potentially dire on a number of fronts. They include, for example, the finance ministry withdrawing from its involvement in various court cases relating to the Gupta family.

Other possible consequences include the worsening of mismanagement of the South African Revenue Services and untrammelled corruption at state-owned enterprises.

The approval of the expensive and unnecessary nuclear deal also becomes a real possibility. Eskom already holds hundreds of billions of rand in debt guarantees from the National Treasury and the nuclear deal would likely be financed through the issuing of further such guarantees.

The combination of irresponsibly issued and utilised guarantees, along with an increase in borrowing costs, a ratings downgrade and falling revenue collection, would lead to a dramatic worsening in various public finance metrics, such as the debt-to-GDP ratio.

Corresponding harm could be done to critical institutions that fall under the Ministry of Finance. These include the Government Employees Pension Fund and the Public Investment Corporation which are responsible for trillions of rand in public sector pensions. Institutions like the Financial Intelligence Centre and Financial Services Board could also be compromised. And there are significant funds that could be appropriated or misdirected from development finance institutions such as the Land Bank and Development Bank of Southern Africa.

As long as principled, competent public servants remain at the helm of the country’s National Treasury it might be harder for the new minister of finance to engage in corrupt, illegal or irrational actions. To do so he would have to suspend or dismiss numerous officials leaving himself open to legal action on various grounds, including labour law. The presence of good officials also means that there is greater scope for whistleblowing which could inform action by civil society, the judiciary and the legislature.

In principle, parliament should be able to exercise significant oversight over the National Treasury, including the budget. But Parliament’s primary source of technical support has shown itself to be unable or unwilling to tackle politically sensitive issues. On top of this the Financial and Fiscal Commission, which also advises parliament committees on such matters, currently has no permanent leadership.

It therefore remains to be seen whether there’s sufficient political will and technical competence in the legislature to significantly mitigate the harm that the recent reshuffle will cause. In that context, the best South Africans can hope for is that somehow the harm can be minimised for four weeks, and that the president and his new cabinet are removed shortly afterwards.