Her consistent attempts to exonerate criminals remind us that graft is ingrained in the ANC, who should never be trusted with the people's money. 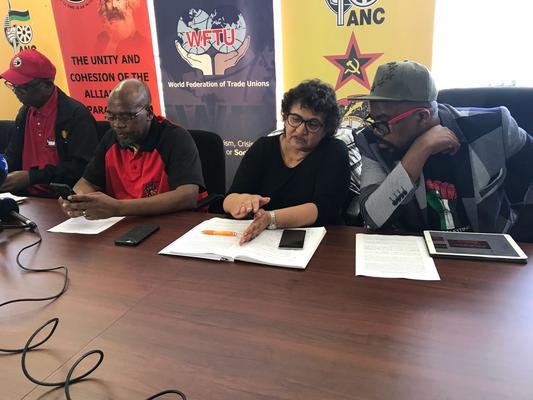 ANC deputy secretary general Jessie Duarte, second from right, speaks at a press conference in Port Elizabeth on the preparations for Coastu's May Day rally to be held in Nelson Mandela Bay next week, 24 April 2018. Picture: ANA

Finding fault with Jessie Duarte is not difficult for those with long memories.

Twenty years ago she was forced to quit as Gauteng safety and security MEC, amid allegations that she tried to cover up a car accident where she had been driving without a licence. A year later she was defending fraudster Carl Niehaus. She still does.

One of her in-laws was an adviser to “weekend-special” Des van Rooyen, who lasted four days as finance minister in the heydays of State Gupture. As late as January 18 this year, she said Jacob Zuma would remain president until 2019.

In the ANC’s internal battles, there is no doubt where Duarte’s sympathies lie. Even after Zuma quit as president, she defended his continued participation in ANC NEC meetings because, “it would be foolish for the party not to tap into his organisational wisdom”.

Wisdom? He is the most divisive figure in ANC history. Count the splits that he engendered. Out of office he remains divisive.

On Twitter there have been ad hominem attacks on Duarte. Yet the focus should not be personal. Rather consider the organisation she represents. As deputy secretary-general, she is one of the ANC top six.

Her attempt to exonerate convicted fraudster Tony Yengeni is bizarre. But she is not alone. The ANC collective chose Yengeni to chair a working group on crime and corruption. Why would they do that? Apart from loyalty to ANC comrades, there is another possible reason. The expression, “set a thief to catch a thief”, is easily adapted to accommodate his lies and fraud.

The ANC has a habit of justifying corruption and deceit. Consider the treatment of former Gauteng health MEC Brian Hlongwa, who bought a R7.2 million house with the people’s money in August 2007. This scandal, which came to the fore again last month, has been known about for a long time.

Yet the Gauteng ANC has kept Hlongwa in senior positions. He is chief whip in the Gauteng Provincial Legislature, where Premier David Makhura has failed to act against him.

Protecting disreputables is part of ANC culture, and is not restricted to Zumaphiles. Then president Thabo Mbeki tried to shield crooked police chief Jackie Selebi. When Niehaus’s shenanigans were exposed in 2009, Gwede Mantashe, who was then secretary-general, was quoted as saying the ANC does not throw loyal cadres who are experiencing difficult times into the garbage bin, but stands by them.

To say the ANC is soft on corruption is an understatement. Some MPs guilty of “Travelgate” fraud were promoted. And there is more than a whiff of scandal about the current top six.

With this background, let us thank Duarte. She is doing a great job. Her consistent attempts to exonerate criminals will help to remind South Africans about one of the main differences between the ANC and other parties.

Corruption is ingrained in the ANC. No hype about a new dawn will change that. They still vote crooks into office. They cannot tell the difference between right and wrong. Law, morality, ethics – all that stuff is a blur to them. They should not be trusted with the people’s money. Never again.