Cyril will have to anger Cosatu if he is to succeed

Ramaphosa – the former union leader – is critically dependent on Cosatu and the SACP, but SA needs him to break free of them somehow. 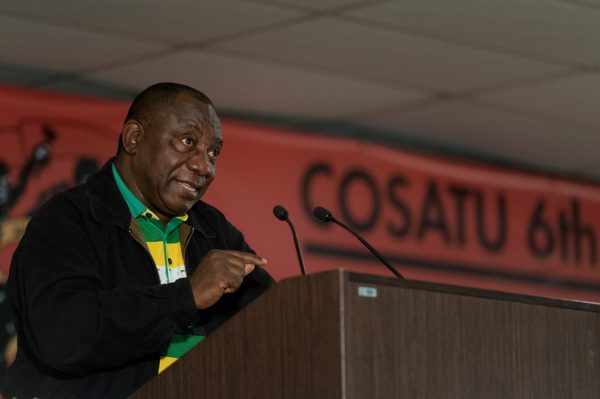 Cyril Ramaphosa speaks with union representatives at the 6th Central Comittee of Cosatu at St George's Hotel in Centurion on 30 May 2017. Picture: Yeshiel

The ANC is in a state of ideological paralysis. It knows what government should do but, so far, has been too timid to do it, for fear of the alliance crumbling.

But at least newly minted Finance Minister Tito Mboweni has made a promising start by articulating what the realities are, rather than just regurgitating dogma and pandering to vote-catching ploys.

In last week’s mini budget, he threw down the gauntlet on two issues.

First, it is unsustainable for government to spend so much of its revenue on salaries and less of it on development.

Second, if we want good roads, we must pay the fees that fund them.

Cosatu – the ANC’s nominal alliance partner and arguably the entity most responsible for snagging the presidency for Cyril Ramaphosa – went ballistic.

On e-tolls, Mboweni was being “provocative”, a “bully” and had “no mandate”. On the public wage bill, Mboweni was “blaming the workers” instead of cutting costs at the top and would “strain relations” with such “provocative” actions.

The powerful, nonaffiliated Public Service Association castigated Mboweni for stating that Treasury would not pay for public sector wage hikes for the next three years but, instead, national and provincial departments would have to “absorb these costs within their compensation baselines”.

Less diplomatically put, this means if departments want to hike wages, they will have to cut staff.

Mboweni placed the DA in a quandary. With a general election looming, the last thing it wants to do is what it should do – hail Mboweni’s good sense.

On e-tolls, the DA has taken the popular, but unsustainable, position that they are not necessary. And on public sector cuts – while the DA has rued the high state wage bill in its seven-point plan released a fortnight ago – the best it could do was to suggest cutting the Cabinet to 15 departments.

The crux issue is whether the Ramaphosa administration is different from its predecessors in its ability to deliver.

The research has been consistent for decades: the most pressing issue for most South Africans is jobs. In 2010, the ANC promised to create 5 million new jobs.

In reality, the economy shed jobs, as it had done virtually from the moment Jacob Zuma took office as president.

Zuma announced there would be 6 million extra “work opportunities” by 2019.

Notice the change in phrasing, evidence of spin.

A “work opportunity” is not a job. It’s a short period – at most, a couple of weeks – of mostly make-work, funded by the state as a social good.

A job, on the other hand, is an ongoing activity where you are remunerated for the surplus value you add to an enterprise by dint of skills and hard work.

It ends only if you move on, or if your employer goes bankrupt, or if you perform poorly.

Minimum wages may make us feel virtuous but are a deterrent to risk-taking, employment-breeding startups.

They also encourage firms to mechanise, rather than hire.

So, too, do unions that have become too powerful and with impunity wreck enterprises by sabotaging plants and assaulting nonstriking workers.

Ramaphosa – the former union leader who is critically dependent on Cosatu and the SACP – will have to repudiate the very shibboleths that handed him the presidency.

In that sense, he can only succeed in creating jobs by not placating Cosatu – and possibly losing his own job.