The civil servants who resisted are the real state capture heroes

These civil servants chose to do the right thing, even when no one was watching, even when their real reward was to be ostracised and hounded out of their jobs. 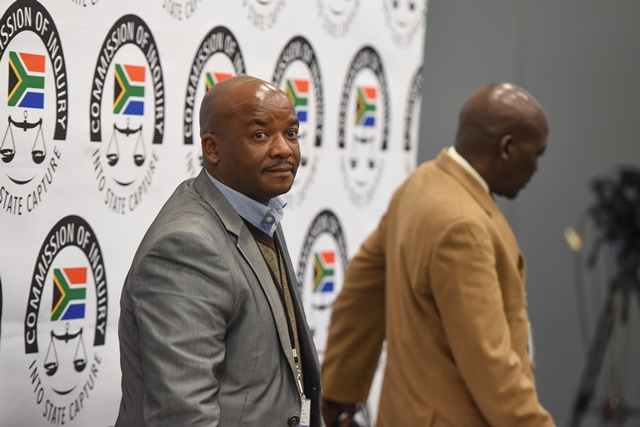 Major Thabo Ntshisi is pictured at the Commission of Inquiry into State Capture in Johannesburg, 03 July 2019. Picture: Refilwe Modise

The names Thabo Ntshisi and Christine Anderson don’t mean anything to a lot of South Africans.

These two, a major and a colonel in the South African National Defence Force, are the people that then chief of state protocol Bruce Koloane leaned on to authorise the landing of the infamous private Gupta aircraft at Air Force Base Waterkloof.

In the controversy that followed the exposure of the landing of the wedding guest-carrying aircraft, Colonel Anderson was left facing disciplinary action for authorising the landing, while the man who name-dropped Jacob Zuma to threaten her to break the law got a promotion to become the country’s ambassador to the Netherlands.

Former Business Day editor Songezo Zibi pointed out in a series of tweets how the state capture project had been so destructive to the careers of many individuals, most of whom were black, when they stood up to unlawful instructions by the principals of state capture.

He used the example of Dr Masimba Dahwa, former chief procurement officer at SA Airways (SAA), who stood up to former SAA board chairperson Dudu Myeni. He was eventually fired and when he appeared before Judge Raymond Zondo at the Commission of Inquiry into State Capture he told how his house was to be auctioned by the bank because he couldn’t pay his bond following the loss of his job.

It got nasty for Dahwa because he is a Zimbabwean. He was threatened that the Economic Freedom Fighters (EFF) would be marching on the SAA board over transformation and that his job was not safe because of his nationality.

In virtually all the state-owned enterprises that state capture spread its tentacles to, there were civil servants who resisted.

These civil servants chose to do the right thing, even when no one was watching, even when their real reward at that time was to be ostracised and hounded out of their jobs. These are the real heroes of the past decade.

On Thursday, the EFF came very close to physically attacking Public Enterprises Minister Pravin Gordhan in parliament, trying to prevent him from delivering his department’s budget. The Red Berets have called Gordhan a “constitutional delinquent” because he has chosen to take the public protector’s report against him on review.

The attacks on Gordhan did not end in parliament. EFF leader Julius Malema took them through to the weekend. In his address to the EFF student command, he likened Gordhan to Mahatma Gandhi, who once wrote Indians were “inherently superior” to black people. Malema also referred to Gordhan as a “deputy white person”.

Dahwa, Anderson, Ntshisi and Gordhan will probably not even make the footnotes of whatever history is recorded over this period.

The racial slurs hurled at Gordhan by the leadership of the EFF will probably not be remembered. Neither will the xenophobic threats that Dahwa endured by standing his ground at SAA at the height of state capture.

It is such a pity that the likes of Koloane received immediate rewards for their illegal actions that were enabled by their proximity to the architects of state capture, while the real heroes of the resistance suffered immensely for their noble stands.