Severely flawed logic is being applied to arrive at conclusions about who should be allowed to travel to the UK during the global pandemic. 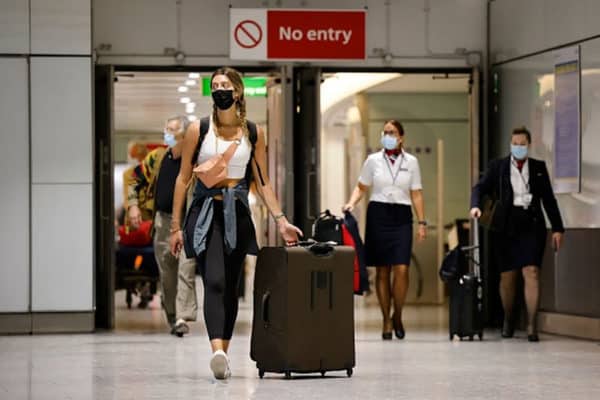 Over 40% of the countries on the UK’s Covid-19 ‘red list’ are in sub-Saharan Africa. Photo by Tolga Akmen/AFP via Getty Images

Earlier this year the UK introduced a “traffic light” system in yet another attempt to contain and mitigate the effects of COVID-19. The system assigned the status of either red, amber, or green to other countries with each colour indicating different rules for a range of things including terms of travel and quarantine requirements.

In mid-September the UK government announced a change to the three lists: the amber and green colours were replaced with one “OK to travel” category. The red list remains in place. The changes will take effect from 4 October.

Attempting to determine the justification for the lists and accurate details about them is less than straightforward. The rules for which countries are in or out are far from transparent, making it difficult to find any justification for why a country is placed on the red list and, perhaps more importantly, how they get off it.

Reports suggest that the UK government’s justification for placing a country on the red list include: known variants of concern; known high-risk variants that are under investigation; and very high in-country or territory prevalence of COVID-19.

These justifications are difficult to understand on a number of levels. The revised rules reported on the UK government’s website are similarly opaque.

Just take the issue of variants. An important feature about viruses like COVID-19 is that mutations are a natural phenomenon. Some mutations present additional risks but many are inconsequential. And, of course, knowledge about the variants present in any country at any particular time depends entirely on the accuracy and extent of testing taking place.

This is just one reason why the red list has kicked up a storm, with some recommending that it be “scrapped in its entirety”. In South Africa scientists have been critical of the reasons cited as justification for retaining their country on the red list.

When the UK’s red list is considered at perhaps a more granular level, the difficulties become immediately apparent. Two scenarios point to the flawed logic being applied.

Sudan is on the red list whereas South Sudan is not.

Yet the numbers available about COVID-19 in the two countries point to this being a ridiculous call.

Current estimates are that Sudan has a rate of daily new confirmed cases per million of 0.23. South Sudan’s rate is higher, at 1.18. On top of this Sudan’s rate of total vaccinations per 100 is 3.34; South Sudan’s is much lower at 0.84.

One may well question what these data tell us about the two countries. It is very hard to make firm conclusions in the absence of information about the health systems and other important factors in the two countries. Comparisons become difficult and somewhat arbitrary.

This is precisely the difficulty with the red list.

Is it a case of cherry-picking the data? At the very least it indicates an opaqueness to decision-making that should be unacceptable in an era of rigorous scientific thinking and evidence-based policy making. When difficulties arise, we need to raise, rather than lower, the bar on our standards of what counts as credible evidence.

The rules around the red list and vaccination status are equally baffling and difficult to fathom.

The UK government website states that from 4am on 4 October, you will qualify as fully vaccinated according to two criteria. The first specifies an approved vaccination programme from a small number of countries. The second stipulates a full course of one of four named vaccines from a “relevant public health body” in 18 different countries. None are in Africa.

Also, from that date

if you have been in a red list country in the last 10 days, you will only be allowed to enter the UK if you are a British or Irish national or you have residence rights in the UK.

To illustrate how ridiculous this is I have mapped out a scenario.

I am an Australian academic currently working in Rwanda. I have had both doses of the Pfizer vaccine and have had numerous COVID-19 tests all with negative results. Neither I nor any member of my family have ever tested positive for COVID-19. I received my Pfizer COVID-19 vaccinations in Rwanda, a country that acted swiftly and decisively with clear and transparent leadership from the earliest indications of the monumental significance of the virus.

Despite all this, I will be unable to visit the UK under any conditions.

Suppose I have a colleague from the UK who, prior to relocating to Rwanda, received her two Moderna vaccinations in Barbados – one of the countries named with an approved vaccination programme – and has been living in Rwanda for six months. After she had been in Rwanda for two months she, hypothetically, tested positive for COVID-19 even though she was asymptomatic. From 4am on 4 October she would be able to return to the UK according to certain rules such as a pre-departure test and a period of quarantine once she arrives.

It is unfathomable to me how this can be achieving anything other than an exacerbation of existing inequities. What possible difference can it make where I had my vaccinations? Is there some reason that being vaccinated in Rwanda or South Africa is inferior to being vaccinated in Barbados (with 360.98 daily new confirmed cases per million or Malaysia with 488.11 daily new confirmed cases per million?

In fact the World Health Organisation recently commended Rwanda’s vaccination drive. Yet it remains on the UK’s red list and Rwanda is not listed as a country with an approved vaccination programme.

The World Health Organisation is clear that

vaccination will not bring an end to this pandemic until it is distributed to everyone around the world.

Yet some countries, predominantly high-income ones, are stockpiling far more vaccines than they need and providing booster shots to people who don’t require them.

COVID-19 is providing us with opportunities to learn a great many things about health and health systems. But perhaps its most valuable lesson is the inescapable importance of equity to the global community. That lesson is ignored to the peril of us all.

Maybe rather than focusing on a red list country club with unclear and questionable criteria, we should create a red list of countries that are actively creating vaccine distribution inequities.