During the third wave, life insurers recorded the highest number of death claims during July 2021. 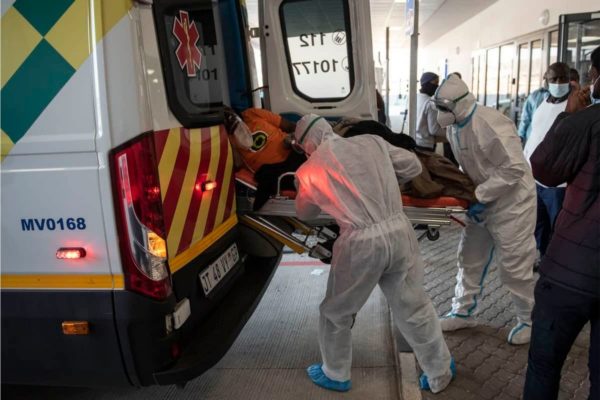 Medics use a stretcher to remove a Covid-19 patient from an ambulance, 21 June 2021, as they admit the patient to the Chris Hani Baragwanath Covid facility in Soweto. Photo for illustration: citizen.co.za/Michel Bega

South Africa’s largest life insurers received 22 544 death claims against fully underwritten life policies* in the 19 months between the start of the Covid-19 pandemic in March last year and the end of September 2021.

While not all the claims were for policyholders who died as a result of Covid-19, five of South Africa’s largest life insurance companies reported a fourfold increase in death claims at the peak of the third wave against a book of 2.09 million fully underwritten new generation life policies.

These statistics are contained in the updated Death Claims Dashboard maintained by the Continuous Statistical Investigation (CSI) Committee of the Actuarial Society of South Africa (ASSA).

Anja Kuys, chair of the ASSA CSI committee, says the dashboard has been updated to reflect data for the three Covid-19 waves recorded to the end of September 2021.

Excess death claims represent those that exceed the expected numbers based on historical data.

Kuys says the aim is to provide life insurers with consolidated insights into the impact of the Covid-19 pandemic to guide accurate pricing of future policy benefits as well as ensuring sufficient capital reserves.

According to Kuys the pandemic has resulted in massive upward swings in the number of claims.

“While the usual number of claims expected for fully underwritten new generation life policies would be between 600 and 700 a month, over the 19 months to September 2021 the number of claims has consistently been above average, and at the peak of the second and third waves reached around 2 700.”

Kuys says claims for insured lives lost exceeded the expected death rate by a large margin during all three Covid-19 waves (represented by the red line in the graph below).

While statistics from the South African Medical Research Council (SAMRC) show that the actual death rate for the overall South African population (grey line in the graph) also exceeded the expected rate, Kuys notes that more significant divergences are seen for insured lives.

Kuys notes that there are two main reasons for the higher excess death rate in policyholders with fully underwritten life policies.

“The numbers provided by the South African Medical Research Council include children, a group that fortunately did not experience excess deaths during the pandemic,” says Kuys.

The second reason, according to Kuys, is that the death rate for the insured population was lower than for the total South African population before the arrival of the Covid-19 pandemic.

This resulted in life insurers recording a much higher percentage increase in excess deaths for policyholders.

“There are significant differences in insured mortality as compared to overall population mortality, which has always been present in South Africa, even pre-Covid. Therefore, it is very important for life insurers to have access to credible statistics relating to the population they insure, to ensure sufficient capital reserves and pricing.”

Kuys adds that the biggest divergence in the number of claims received to expected was recorded during the second and third waves.

The excess death rate for the overall population was only two times higher than expected.

At the peak of the second wave, life insurers received death claims during January 2021 that exceeded the expected death rate by around four-and-a-half times, while the excess death rate for the overall population was around two-and-a-half times higher than expected.

At the peak of the first wave during July 2020, the excess number of claims experienced by life insurers of 192.4% was the closest to the overall population excess rate of 158%.

She notes, however, that the actual number of Covid-19 deaths is much higher.

According to Kuys, the dashboard indicates that among policyholders the rate of claims due to natural causes has remained consistently above normal since the beginning of the pandemic.

The graph below shows that the pattern of claims received due to deaths from natural causes closely follows the patterns of the Covid-19 infection waves.

According to Kuys, the impact of Covid-19 has been surprisingly similar across all age groups in that the number of claims have almost doubled for young lives as well as for the older ages.

The vaccination roll-out for adults aged 60 and over commenced mid-May 2021, and Kuys says that while it is perhaps too early to comment, it is promising to see that the relative increase in death claims for those age brackets are slightly lower.

She says this will continue to be monitored throughout the fourth wave and will be reported on when as soon as credible statistics are available.

Kuys comments that the number of death claims has nearly doubled for men and women.