Chaos ensues at education dept as pupils struggle to get placed

More than 41 000 Grade 1 and Grade 8 pupils in Tshwane were still without schools on Monday morning. 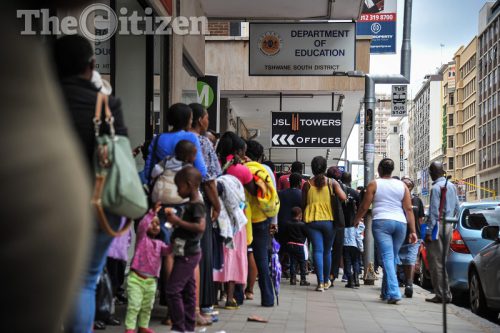 Parents and guardians are seen queing outside the department of education in Pretoria CBD, 9 January 2017, some people had been queing since 6am in the morning, Pretoria. Picture: Jacques Nelles

Chaos broke out at the Tshwane department of education in Pretorius Street on Monday morning, where hundreds of parents and children were waiting in winding queues to have pupils enrolled.

More than 41 000 Grade 1 and Grade 8 pupils in Tshwane were still without schools on Monday morning. Parents who had been standing in queues for five to seven hours started shouting, pushing and screaming at each other. Officials from the department were also screamed at.

Gauteng department of education spokesperson Oupa Bodibe on Monday said about 7 945 Grade 1 and 6 229 Grade 8 pupils needed to be placed in Tshwane.

He said the department had received 35 655 applications for Grade 1 pupils in Tshwane.

“Only 24 336 of these had been placed by Monday morning,” Bodibe said.

Parents on Monday complained that they had applied online and were promised they would be referred to schools, but “nothing has happened so far”.

The department introduced the online registration process for grades 1 and 8 in a bid to make the application process more efficient.

But the system crashed, with parents saying the old system of going to a preferred school and applying there had worked better.

Simon Sepeng said he had been waiting in the queue since 7am.

“I applied online for my daughter to go to Grade 8, and nothing happened. This was after having applied online in time. I even sent an e-mail to the MEC and he did not respond,” Sepeng said.

Bodibe explained that the department had to place 58 000 pupils in schools throughout the country and that it was impossible to help everybody on Monday.

He promised that the department would make sure every child was placed in a school.