Congolese nationals living in fear after alleged assault by cops

Many Congolese nationals were allegedly in hiding after rumours circulated that police were hunting them down following recent protests outside the Congolese embassy. 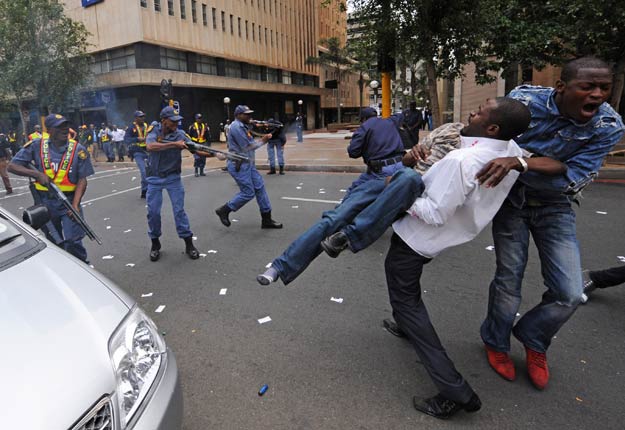 Many Congolese residents in Johannesburg are in hiding in fear of police after a family claimed they were attacked by South African Police Service (Saps) officers in their home in Norwood.

According to Congolese leader Prince Mpinga, the attacked family was celebrating the new year and their child’s birthday when four police vehicles pulled up. Eight officers stormed into the house, saying they were responding to a noise complaint.

“They came into the yard, got into the house and started beating up the family. They were telling them that they are making too much noise. They assaulted the seven-year-old child and stepped on his hand,” he said on Wednesday.

When a family member tried to film the incident, the police snatched the camera and continued to assault them before taking their cellphones, Mpinga said.

He said the father and son were treated at Charlotte Maxeke Academic Hospital. The father, Noel Malyka, allegedly had an eye injury and the boy was allegedly beaten above the waist and his hand was injured.

“A doctor gave them a referral letter to take to the police’s station commander where they opened a case. They have also opened a case of police brutality with Ipid (Independent Police Investigative Directorate),” Mpinga said.

Ipid spokesperson Moses Dlamini confirmed this, adding that Malyka submitted a medical report. “He managed to get the registration numbers of the vehicles of the police officers who assaulted him. The matter is under investigation,” Dlamini said.

Mpinga said many Congolese nationals were in hiding after rumours circulated that police were hunting for them in the wake of protests outside the Congolese embassy in Pretoria in December.

Eight Congolese nationals were arrested for public violence on the day, with six released on R2 000 bail each on Tuesday. Two Congolese men are in custody as their documents have expired.

“The Congolese community is continuously harassed and intimidated by police. We heard police are hunting for us, but we do not plan on going back to the embassy. Some Congolese have turned to the UN in Pretoria for help,” he said.