Lily mine owners ‘hoping matter will miraculously go away’

The mining minister had promised financial assistance to the families 'and, to date, workers have not been remitted', says Amcu. 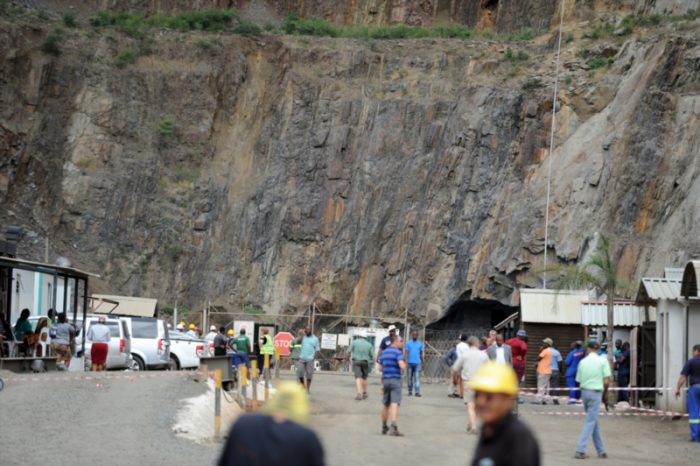 Search and rescue teams at the collapsed Lily Mine on February 13, 2016 in Barberton. Photo: Gallo Images / Beeld / Felix Dlangamandla

One year on and there is still no sign of the bodies of three mineworkers trapped underground in a tragic accident at Lily Mine in Barberton, Mpumalanga. And there is no closure for families and no compensation.

In a few days, an inquiry into the disaster in terms of the Mine and Safety Act will start following an investigation by the mineral resources department (DMR), it announced.

“Since that day, the department has worked tirelessly to ensure that the container which carried Ms Yvonne Mnisi, Ms Pretty Nkambule and Mr Solomon Nyerende is found and brought to the surface,” Mining Minister Mosebenzi Zwane said.

The three had been on duty in a container when it was swallowed by a massive sinkhole. “The department has concluded the investigation into the accident and it has now been converted into an inquiry in terms of the Mine Health and Safety Act, which will commence shortly.

“No mining can resume until the inquiry has been concluded. Should it be found that there was any recklessness or negligence which resulted in this accident, the law will take its course.”

Zwane added numerous challenges, “including a further deterioration in and collapse of the walls surrounding the area made rescue efforts impossible, and the rescue operations had to be suspended in order not to risk more lives.

“Seventy six of the other employees were fortunately rescued before conditions worsened. “The primary objective remains finding the container [in which the three miners are trapped], in order for the families to get closure on this matter.

“We understand fully the frustrations expressed by the families and the public at large on the amount of time it has taken to conclude this process, but we want to assure South Africa that no effort is being spared to ensure that this matter is resolved.”

Association of Mineworkers and Construction Union (Amcu) is still demanding that disciplinary action is taken against “all who neglected their responsibilities, resulting in the disaster”. “All parties found guilty need to be disciplined and criminally charged,” said Amcu president Joseph Mathunjwa, who called on the Chamber of Mines and the business community to cooperate in efforts to retrieve the container.

“We demand closure on the investigation at the mine and that a report on the incident be published.” He said the minister had promised financial assistance to the families “and to date, workers have not been remitted”.

“The DMR, government executives and the owners of the mine have buried their heads in the sand hoping that this matter will miraculously go away.

“Initially, the budget for this was R400 000, which the company and state could not secure in order to finalise this operation. There has not been any concerted cooperation from public-private partnerships in tragic moments, with the same zeal that we see in the tender system.”

Vantage Goldfields and its business rescue practitioner remained liable for the payment of R200 000 each to the families of Mnisi, Nkambule, and Nyerende, and R50 000 each to the rescued employees.