The institution says the former president has never expressed sorrow for hundreds of thousands of preventable Aids deaths. 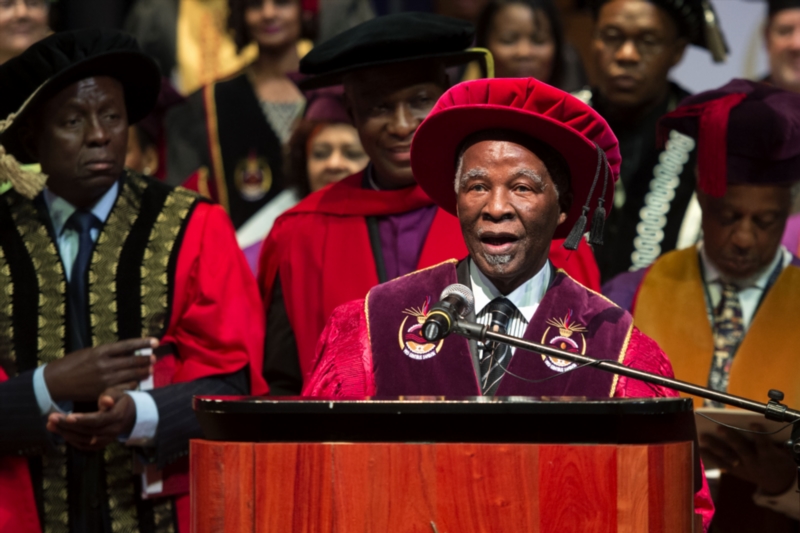 Former President Thabo Mbeki during his inauguration as Chancellor of the University of South Africa (Unisa) on February 29, 2017 in Pretoria, South Africa. (Photo by Gallo Images / Beeld / Deaan Vivier)

As many were celebrating the inauguration of former President Thabo Mbeki as chancellor of the University of South Africa (Unisa), Section27 made it clear that it would not join the choir.

The NGO argues that the revered intellectual was a “chief embracer of Aids denialism” that led to the “preventable” and “premature” deaths of about 330 000 people. The institution says “lest we forget” about this issue because the former statesman has allegedly “never expressed any responsibility or sorrow for these deaths”.

“How short are our memories?” asked the activist group, adding that it would not join in congratulating Mbeki on his new election to become Unisa boss.

“Then president Thabo Mbeki played a large part in these deaths as the chief embracer of Aids denialism. Mbeki imposed his personal views on the government as a whole and the department of health in particular in order to deny people with Aids access to life-saving antiretroviral treatment.

“Mbeki has never expressed any responsibility or sorrow for these deaths. Deaths of poor men, women and children. Forgotten people.

“How short are our memories? What hypocrites we seem to be. How quickly we forgive and forget despite the absence of any apology, explanation or effort at reparation.

“As with the silent poor, so with the silent sick and the silent unseen. As with preventable deaths in 2000 or 2005 or 2016, how conveniently most of us forget. How quickly we pass over the lost lives of those that cannot stand up and object. They cannot speak out for they are either dead or have no agency or power to do so.

“For these reasons we will not join celebrations welcoming the new Unisa Chancellor Thabo Mbeki. He may have played a sterling role in the liberation struggle, he may be an important intellectual, but his presidency and life will always be indelibly stained by the deaths caused by his Aids denialism for which he never apologised. This week’s plaudits are indicative of an unhealthy society where the lives of the poor are worth so little. In the absence of any apology or effort at reparations, he should not be honoured in this way.

“To those who think we are wrong to pour rain on Mbeki’s parade, we say examine your consciences and morals. Refresh your memories. Reject your amnesia.

“For those who care to care we say: Light a candle and remember those who are gone and those who today still pay a heavy, heavy price. Don’t forget them.”

On March 24 2016, Mbeki released a letter in which he expressed his opinion and his side of the story on this long-running and controversial matter. Read the full letter below:

EFF rejects return of Afrikaans at Unisa 'with contempt', asks for Swahili instruction
2 hours ago
2 hours ago

EFF rejects return of Afrikaans at Unisa 'with contempt', asks for Swahili instruction
2 hours ago
2 hours ago