March all you like, we listen to government, says Eskom

Truck drivers want SA to continue to rely on coal and not renewable power. 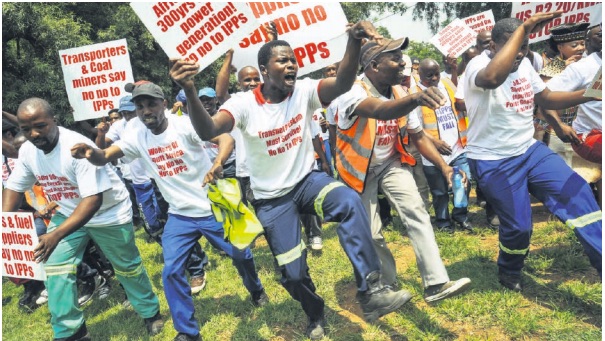 Truck drivers are seen protesting on the lawns of the Union Buildings in Pretoria after their arrival from the Marabastad Bus Depot. Picture: Jacques Nelles

Power utility Eskom said it would only implement what government instructs, despite hundreds of coal drivers marching to the Union Buildings against the execution of the independent power producers (IPPs) on Tuesday.

The capital city was at a standstill when about 200 trucks parked or drove painfully slowly in the streets and highways in the morning.

The drivers, affiliates of the Coal Transporters’ Forum (CTF), downed their tools over President Jacob Zuma’s recent announcement that government would employ additional IPPs, which could result in mass retrenchments.

“This is not a political statement. This is a message to the president to make sure they slow down the process of signing IPPs so we can stay in business. The IPPs should not be something that takes us out of business. In the US, they introduced IPPs but eventually reintroduced coal mines because it didn’t work,” said CTF spokesperson Mary Phadi.

Zuma announced in his state of the nation address that the Renewable Independent Power Producers’ Programme was on track and Eskom would contract IPPs.

Eskom spokesperson Khulu Phasiwe admitted that the IPPs would lead to job losses, but the power utility only responded to government’s instructions.

“Eskom is implementing what the government said they should do. We will be releasing a statement soon regarding this,” he told The Citizen yesterday.

But CTF chairperson Steve Mokwana said there was no need to secure IPP contracts as Eskom was producing enough power, with a surplus of 5 600MW, including operating reserves of 2 000MW.

He said the power utility would be spending R2.14 per kilowatt-hour of electricity from IPPs, which can be produced at 32 cents by using cheap coal.

The kilowatt-hour that is bought at R2.14 is sold at 86 cents to consumers, Mokwana said.

“This has cost the economy R9 billion in 2016. It has also resulted in the reduced coal consumption by 3 million tons of coal. There is no need to secure IPPs as there is a power surplus, the economy is growing and the demand of electricity decreasing.

“The cost to the economy will be sustained at R9 billion per annum until 2021. This is unreliable. If government cannot cope with this, we could have complete darkness,” Mokwana said.