‘Our souls are not for sale,’ says Gordhan on Guptas’ ‘brown bags’ 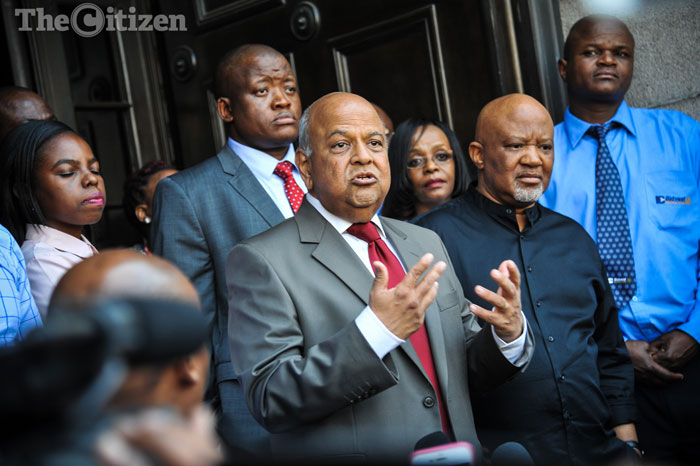 Axed finance minister Pravin Gordhan says that the “so-called” intelligence report that implicated him and his axed deputy is “absolute nonsense”.

The “intelligence report” insinuated that Gordhan, his deputy Mcebisi Jonas and National Treasury director-general Lungisa Fuzile were involved in a conspiracy to undermine the economy of the country. The former finance minister said he found the allegations in the report nonsensical, and could not see how they could be reason enough to see the minister and his deputy sacked.

Speaking at a media conference at the Budget Office of National Treasury on Friday, Gordhan said that the second reason given for their expulsion was the international investor roadshow overseas that had to be cut short after President Jacob Zuma demanded that he and his delegation return home “immediately”. But Gordhan says there’s nothing unusual about international investor road shows as they happen every year after the budget and the medium-term budget policy statements.

“There are two things that events of last night bring to the fore. The first was the whole question of this mysterious text here. This is the so-called intelligence report. This is the intelligence report which said, among other things, that the two of us and the director-general are involved in this massive conspiracy to undermine the economy of this country.

“And if you read this, it’s absolute nonsense. This is not the basis upon which you ‘fire’ or release from their responsibilities a minister of finance or a deputy minister of finance. So here it is … we all had it. And it’s circulating quite widely in the country at the moment.

“The second reason given is that when we were at this very ordinary routine roadshow … that happens every year … [it] happens every year after the budget and after the medium-term budget policy statements  – where in particular we meet bond investors in large numbers in order to share with them latest budget figures … which they know already. Secondly, we are there on a face-to-face basis to explain to them any details they want explained to them or any number they would like explained to them.

“There’s an allegation circulating around, and it sickens me. And that allegation is that I had secret meetings or a secret meeting with somebody or ‘somebodies’, and the intention was to undermine this government. Now people like both of us … we don’t claim any special privilege, and from a very young age [we’ve] been activists in the struggle [against apartheid]. Ehy on earth would we want to undermine this country now? I don’t think anybody can reasonably and logically explain.

‘We have got our own brown bags’

Gordhan further asked the audience to applaud his deputy for refusing a huge sum of money that was allegedly offered to him by the Gupta family as a bribe. The audience, which included Treasury staff and journalists, gave the axed deputy minister a standing ovation. Jonas claims he refused Ajay Gupta’s R600 million bribe and the position of finance minister.

The minister said they were not for sale, and they would not sell their souls to the Guptas, who are believed to have been trying to “capture” National Treasury.

“South Africans who are watching will commend the deputy minister … in saying that he was offered a bag of cash, and if you do commend him you can clap.

Secretary-General of the ANC Gwede Mantashe told radio 702 that Zuma fired Gordhan and his deputy despite unhappiness from the ANC’s national executive committee.

“There was a discussion on Monday, but [this] was more on the area of the finance minister. When we went there it was clear to us that he was going to be reshuffled. The rest of the reshuffling, I can describe it as [us] being informed, not consulted,” said Mantashe.

The DA called Zuma’s decision to fire the finance minister and his deputy a sign of “complete state capture” which “should be a rallying call for all South Africans to stand together and defend our hard-won constitutional democracy.”