Man fights off armed farm attackers with his bare hands

One of the attackers ended up with his own knife in his face. 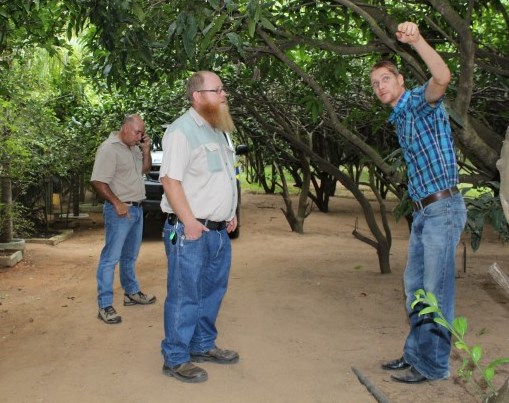 A man stabbed his attacker in the face with his own knife to protect his elderly relatives from being victims of a farm attack on Wednesday night.

One of the men was armed with a handgun.

Vosloo told Lowvelder the dogs alerted him that someone was outside the back of the house at about 9pm.

“I stepped outside the door when a man came at me with a knife. I fought him and I grabbed the blade with my hand, I took it off him and stabbed him in the cheek.”

Mr Johan Vosloo the night of the attack

The attacker ran away bleeding and another suspect came out of the dark with a firearm.

“I saw the next man coming for me with a gun and I fought him off too. He also ran away. All I could think of was that they must not harm the only family I have left.”

He said he had never had any form of self-defence training. Vosloo recently moved to the farm with his godfather Mr Philip Vermaak (64) and his brother Mr Richard Drake (52).

Earlier that day, Vermaak said they had noticed a bakkie with about four men on the back near the farm.

“I saw it drive out of the area without the men on the back. I suspect is was them.”

Vermaak, with tears in his eyes, said that he was so thankful that Hi-Tech Security Nelspruit and the police had arrived at the scene so quickly.