The violent protest saw four houses and a police Nyala torched by residents. 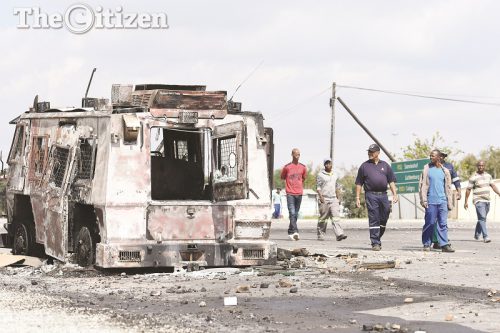 A burnt Police Nyala house at Lichtenburg in North West, 25 April 2017, after violent protest erupted in the area. It is alleged that a farmer caught a young child stealing Sunflower and put him in the back of the van and the boy died by jumping. Picture: Nigel Sibanda

Although calm appears to have returned to the troubled areas of Coligny and Lichtenburg in the past two days, police officers will continue to patrol in the area, says the SA Police Service (Saps).

This week, provincial police officers had their hands full trying to defuse what turned into a volatile situation.

Four houses were torched, as well as a police Nyala. Shops were also looted.

What started as a protest over lack of service delivery turned into a race war, which was sparked by the death of a 12-year-old boy.

According to reports, the boys’ death was allegedly caused by a white farm owner.

However , speaking to The Citizen on Thursday, national police spokesperson Brigadier Vish Naidoo said the two men who were arrested this week in connection with the boys’ death were expected to appear in court on Friday.

He said 48 people were arrested on charges of public violence and looting.

“Already, 14 people who were arrested [have] appeared in court. [They] were remanded in custody while their cases have been postponed to Wednesday.

“Those who were arrested on charges of stolen goods were released on bail of R300 each,” he said.

Naidoo said police were still looking for suspects who torched a police Nyala this week, stressing that it was not true that police officers reacted slowly to this week’s violent protests in the area.

Naidoo said although the situation in all areas that were affected by the violent protest this week have stabilised, the increased police presence in the area would remain until such time that law and order has been fully restored in the community.

He said police officers who were deployed to another tense area in Vuwani, Limpopo, would also remain there as the total shutdown of services protest action continues in its third week, with no end in sight.

Spokesperson for the pro-Makhado Demarcation Task Team in Vuwani, Nsovo Sambo, said the shutdown, which has resulted in children being barred from going to school and businesses prevented from operating during the week, will again be suspended, but only for the weekend, starting from today.

“We could have suspended the shutdown starting on Freedom Day, but there is nothing to celebrate on the day because we still don’t have freedom of association and freedom to gather.”