Radio host spits fire after De Klerk foundation chairperson tells him to be 'grateful' to the former apartheid leader. The heated exchange happened on Tuesday morning when Eusebius McKaiser hosted a debate on former apartheid president FW De Klerk’s remarks that the Truth and Reconciliation (TRC) had found nothing wrong with him.

This struck a nerve with McKaiser and some of the Radio 702 listeners who called into his show.

The question of the debate was whether De Klerk should be given the platform to criticise the current ANC government, including President Jacob Zuma, since De Klerk he allegedly had a hand in the massacre of political activists during apartheid.

“Does he deserve a seat at the table of national discourse?” listeners were asked.

During National Foundations Dialogue last week in Parktown, De Klerk was quoted as saying: “I agree with President Zuma that we need radical economic transformation. Instead of frightening local and international investors with threats to property rights, merit needs to be taken seriously.”

The debate was partly ignited by Madeleine Fullard, an employee of the TRC’s missing persons unit housed within the National Prosecution Authority (NPA). Fullard leads a team of investigators searching South Africa for the remains of political activists murdered during apartheid.

De Klerk talking re accountability? Here are the graves of sleeping teenagers killed in 1993 Mthatha raid he authorised. No accountability. pic.twitter.com/XkWvq75OBF

Political analyst Sithembele Mbete, of the University of Pretoria, said TRC investigators found great difficulty in finding information needed to establish de Klerk’s role in “violence by third force”. She said using Mandela and the Nobel Peace Prize he had shared with De Klerk was not enough to absolve De Klerk of his alleged role in the killings.

Mbete said De Klerk was very much part of the apartheid machinery, and the notion that the TRC failed to pin culpability on him was a red herring.

“Boipatong Massacre during his presidency was a direct state violence. He holds political culpability as a leader at the time. Ultimately, the buck stops with him. We say the same thing about Zuma, that if he didn’t know about Nkandla, he is still responsible,” said Mbete to 702 listeners in response to McKaiser’s question on political culpability.

“He didn’t play open cards with the TRC. There is a great deal of information De Klerk still has, and ultimately we’ll never know,” Mbete told McKaiser. She said it was problematic to draw moral equivalency between De Klerk and Thabo Mbeki’s era of Aids denialism. She said the one happened during an authoritarian, apartheid government never voted in by the majority of citizens it had oppressed.

“There seems to be no consistent moral position,” she said in response to McKaiser’s question on whether the Marikana and Boipatong massacres happening under two different dispensations was cold comfort for victims and family members looking for answers not forthcoming.

A caller by the name of Mavuso said comparing atrocities committed during a system declared a crime against humanity “intellectually upset him”. He said he found De Klerk morally tainted.

De Klerk had previously told CNN’s Christiane Amanpour: “What I haven’t apologised for is the original concept of seeking to bring justice to all South Africans through the concept of nation states [essentially creating two separate states, one black and one white].”

The latest radio discussion seemed to tick off Dave Stewart, the chairperson of the FW de Klerk Foundation, who called in to the show to admonish McKaiser for failing to get the “other perspective on De Klerk”.

“I don’t think I have ever heard such a biased programme. Did you invite anybody from any organisation who is able to put another perspective on De Klerk?” Stewart accused McKaiser of getting “emotional” and said that undermined his ability to handle the discussion in a balanced manner.

McKaiser shot back, saying what Stewart really wanted to say, but being polite about it, was that “I am deeply touched that you don’t say things that I agree with”, he told an increasingly irate Stewart.

“There wouldn’t be a democratic South Africa if it wasn’t for the role De Klerk played,” Stewart countered. Nelson Mandela frequently spoke with praise on the role De Klerk played in laying the foundations for a democratic South Africa, Stewart argued. This infuriated McKaiser, Mbete and a number of callers who crammed the station’s lines trying to air their views on Stewart’s position.

“All South Africans have a right to a political debate,” McKaiser was told by Stewart in response to the main question. McKaiser then told Stewart that De Klerk’s political speeches were not an issue, and the problem was on why he continued to regard himself as a moral authority. The two men engaged in a prolonged verbal spat when MacKaiser questioned whether De Klerk was entitled to platforms.

“Who the hell are you to decide that he is not entitled?” Stewart challenged McKaiser on air.

“I am a black person that your foundation wants me to tell how to react. You cannot tell me not to be emotional. Who the hell are you to tell black people how to react?” McKaiser told Stewart.

Stewart said that had it not been for the role played by De Klerk, South Africa would not have transitioned into the democratic society that it had become, and that black people should be grateful.

McKaiser was having none of it. “That is absolute nonsense. Are you saying black people would never have been able to dismantle apartheid without the help of your boss. What about agency?”

“Eusebius, you are so anti-white,” Stewart said to audible giggles from Mbete in the studio.

This was when McKaiser told Stewart he was talking “nonsense” and said: “Hlala phansi, wena! [You sit down!]”

A white caller told McKaiser that she was sorry about what Stewart had said.

“I need to apologise for what Stewart said. As an Afrikaner, I want to say I benefited from apartheid. The reason he [De Klerk] is still roaming the streets is because of the system that was chosen. It has nothing to do with him. The Nobel Peace Prize should never have been awarded to him. We should be speaking to him from some sort of prison. He never acknowledged or apologised for apartheid. According to me, he is some sort of animal,” she said.

Trade unionist Zwelinzima Vavi also called into the show and slammed Stewart for being “insensitive”. 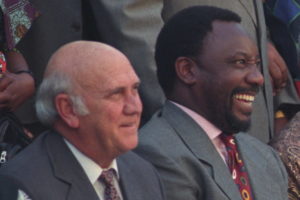 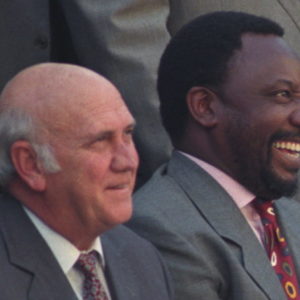