Instead of dealing with the white learner's statement, the school allegedly chose to discipline the black learners. 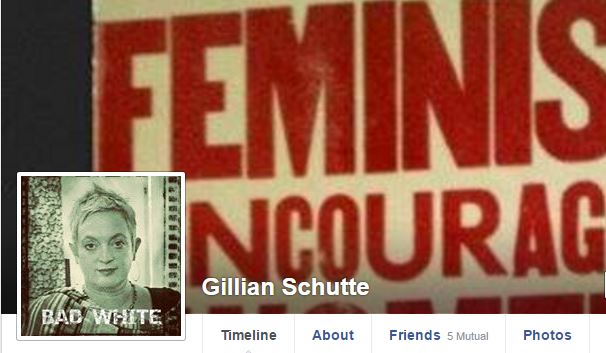 The screenshot of Gillian Schutte.

Social activist Gillian Schutte, who last year took to Facebook and wrote that “all white people are racist”, has found herself in the middle of another racism fracas.

Schutte posted on her page about an incident her son told her of that occurred at a school he attends during an economics class at the beginning of this month.

“A white girl was told to clean up the mess. She declared that she does not clean – cleaning is a nowhere job reserved for blacks. She said this in front of a group of classmates who were black girls,” Schutte wrote in a Facebook post that appears to have been taken down after The Citizen enquired about the incident.

Schutte revealed the black learners were “outraged and chased her out the classroom around the school. They really wanted to moer her.”

All whites are racist – Gillian Schutte

This apparently race-fuelled drama eventually ended up in the principal’s office.

“And the black girls got into trouble for being aggressive. The white girl, it seems, has been let off scott free (sic),” she elaborated.

In the post, Schutte revealed: “The principal is a white male – most of the teachers are white. This is a pattern repeated across the Model C and Private School stratum in SA.

“When people mouth off about radical transformation, do they have the will to wrestle the discourse from the white domination that infiltrates every echelon of society here?” she asked.

She further stated: “I hope their parents step in and demand justice.”

In closing, Schutte wrote: “Of course racism causes depression/feelings of powerlessness and worthlessness in those who are victims of it – and it begins at nursery schools when kids enter the institutional world.”

When contacted by The Citizen just before the post was taken down, Schutte expressed displeasure about the article.

“I have not got much more to say. The matter was settled at school as a dispute. I have suggested an anti-racism workshop.”

She further underscored her reluctance: “I would prefer you to leave my name out of this article.”