Karabo Mokoena was laid to rest at the West Park cemetery this afternoon. The funeral of Karabo Mokoena was held in Diepkloof, Soweto on 19 May 2017. Image: Yeshiel Panachia

Karabo was laid to rest in a stunning white coffin, and this is the moment it arrives in church.

Karabo’s older sister, Bontle, could barely speak as she thanked her relatives and friends for their support. “Karabo’s friends, please watch DSTV with me,” she said.

Don’t think there was a tearless person in the room after older sister, Bontle Mokoena spoke 💔 @News24 #KaraboFuneral #KaraboMokoena pic.twitter.com/Wp4bWSOUAM

Attendees were emotional as Bontle said she couldn’t believe her sister was gone.

"I look at the coffin and it's hard for me to believe it is you in there," says Bontle failing to hold back the tears #KaraboFuneral

"This is the toughest thing I've ever had to do in my life," says Bontle Mokoena who is #KaraboMokoena's older sister.

The programme was filled with pictures of a young Karabo. 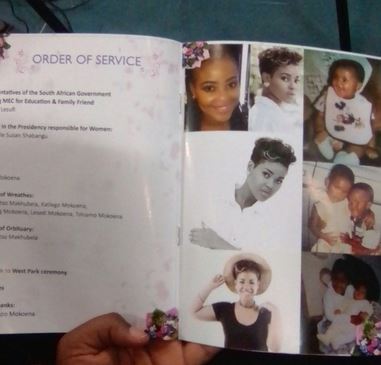 A powerful moment when Karabo’s dad, Thabang, stands with a poster that reads: “No respect for abusers.”

#KaraboMokoena dad stands with a "No Respect for Abusers" poster. Next to his daughter's coffin.
The heartbreak. pic.twitter.com/gYz2n9mjXE

Ministers Susan Shabangu and Bathabile Dlamini were in attendance

"Our women are angry because we believe that our men are letting us down we live in fear," says Minister Shabangu #KaraboFuneral WATCH: Sandile’s Bible reading will be used to lighten his sentence – Bathabile Dlamini