Mild to warm weather still likely in Gauteng for better part of this week. 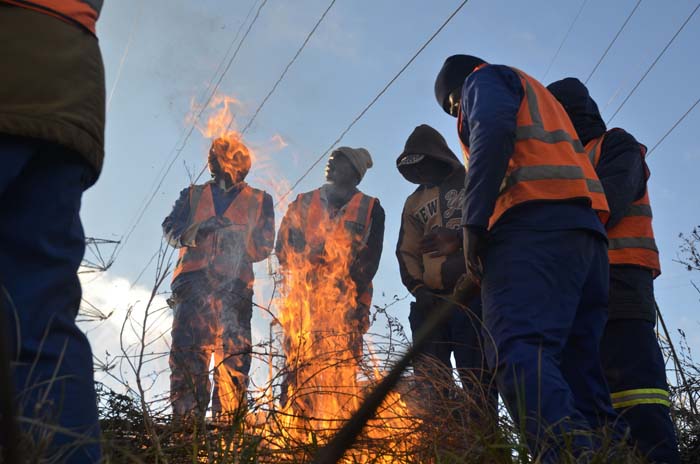 Construction workers stand around a fire to keep warm, 06 June 2014, in Industria West, Johannesburg. Residents of Johannesburg are expecting temperatures to drop as a cold front passes through the country. Picture: Alaister Russell

Although seasonal forecasts have been suggesting above normal rain for the Western Cape this winter, it is still not clear exactly when that will happen, the South African Weather Service said yesterday.

But two cold fronts are on the way which could bring rain to the parched province – and shivers to the rest of the country.

The Western Cape, which receives most of its rainfall during winter, is in dire need of torrential rain following months of dry weather.

The first, which would be the weakest, was expected to make landfall on the southwest coast of the Western Cape tomorrow.

“The next cold front is expected on Friday and it will definitely bring some rain, with some severe drops in temperatures also expected.

“Daytime temperatures in the Western Cape are expected to be in the mid-teens, before the cold front spreads towards the eastern parts of the country on Saturday,” he said.

Venter said residents in the Eastern Cape and KwaZulu-Natal could expect a drop in temperatures too by Saturday. The cold front was also expected to affect the Free State and southern parts of Mpumalanga, as well as Gauteng.

In Gauteng, the change in weather will be felt from Saturday evening, with maximum temperatures on Sunday also expected to drop into the mid to high teens.

Over the past few days, maximums in Gauteng have improved and, according to Venter, people can still expect mild to warm temperatures for the better part of this week. In Johannesburg, maximums are set to range between 23ºC and 24ºC and hover around 25ºC in Pretoria.

The first signs that winter was already knocking on the door were felt more than a week ago, when temperatures in Vereeniging, Johannesburg and Pretoria dropped, with highs of between just 9ºC and 11ºC.

Cold weather is expected from month-end.