Trials and tribulations only made him stronger, says the new Bok skipper. The road to the top wasn’t easy for new Springbok rugby captain Warren Whiteley but it was a journey he confesses made him stronger.

Whiteley went from being released from his junior contract at the Sharks to becoming the “logical” choice as national skipper when Springbok coach Allister Coetzee recently announced his squad to take on France in three home Tests this month.

The Springboks face France at Loftus Versfeld next weekend, in Durban on June 17 and at Whiteley’s “home” at Ellis Park a week later.

The popular 29-year-old “Wazza”, as his mates call him, was deemed surplus to requirements at the Sharks academy in his early years.

Born and bred in Durban, Whiteley was forced to leave his familiar and beloved KwaZulu-Natal surroundings after he was ironically sacked in 2008 by Rudolf Straeuli, the then Sharks CEO with whom he now has a great relationship at the Lions.

“I don’t hold it against Rudolf – and if I was in his position I would have let me go as well. There just wasn’t space for me at the Sharks. I wasn’t getting a chance,” Whiteley said.

It was challenges like this that taught Whiteley how to deal with some of life’s hard lessons at an early age. “For instance, a few years earlier my parents had moved to Johannesburg from Natal when I was in Grade 10 at[Glenwood High] in Durban, which forced me to go to boarding school,” he said.

After leaving KZN for a brief spell at Eastern Province, it was former Bok backline and Sharks head coach Dick Muir who made contact with Whiteley in Port Elizabeth in 2009.

“Dick said he believed in my ability, that he saw something in me and that he would back me and that’s all I wanted. He remembered me from our time at the Sharks and said I’d be offered more of a proper chance at the Lions,” said Whiteley.

“Dick was on the verge of joining up with the Lions and he asked me to look into coming up to Johannesburg.”

But life at the Lions wasn’t all plain sailing after John Mitchell took over from Muir.

“Mitch was tough. He was extremely honest and technically brilliant and I learnt a lot from him. We all did, but it was difficult with him as coach,” said the new Bok skipper.

Whiteley is widely regarded as an inspirational leader who has merged his team with coach Johan Ackermann, who took over from Mitchell in 2013, into a tight family off the field. But juggling his rugby family with his loved ones isn’t always easy, especially after becoming a father when his wife Felicity had daughter Ava on January 4, 2015.

“We left for a Super Rugby tour just after she was born. My wife was on her own for long periods and the first few months were difficult,” he said.

“After that we were more settled, as Ava was getting older and everything was getting easier. I miss my family tremendously when I am on tour.”

Whiteley has a couple of other secret passions.

“These days I’m trying my hand at carp fishing. Having grown up on the coast, fishing was always a huge part of my life. But I really enjoy art, too, which runs in my family.

“I’ve also been coaching at St Stithians. I really enjoy giving back to the game and in a way it feels as if they are doing more for me than I am for them,” said Whiteley, who once tried his hand at studying graphic design.

Last year, a day before the Lions were to play the Hurricanes in a Super Rugby game at Ellis Park, Whiteley fell victim to an attempted robbery just outside the stadium.

“Strangely enough, they weren’t interested in taking my car, but were more focused on taking my wallet and phone,” recalled Whiteley.

“They also didn’t want my kit bag which was loaded with clothing, as they threw that back into the car.”

Whiteley, who won a gold medal with the Springbok Sevens side at the 2014 Commonwealth Games, revealed how he mostly spent his junior days as a backline player, which perhaps explains why he is often called a “roaming” No 8.

“I spent the majority of my junior years playing at flyhalf, centre, fullback and even wing,” said Whiteley, who made his Bok debut in 2014 and has played 15 Tests.

“As I grew older and bigger, I moved into the forwards and started out as fetcher before becoming an eighthman. “In terms of my skills development, I feel it was of great benefit.”

As far as captaincy goes, the widely respected Whiteley also sees his role as leader as a work in progress.

“I think my first job as Springbok captain is to get to know the players personally, building relationships,” he said.

Come Saturday, the next leg of Whiteley’s journey begins at Loftus. 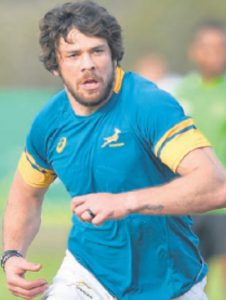 Rugby World Cup just two years away, but focus is on the now — Am
9 hours ago
9 hours ago
PREMIUM!

Rugby World Cup just two years away, but focus is on the now — Am
9 hours ago
9 hours ago
PREMIUM!