Dlamini-Zuma’s proxies allegedly collapsed the conference when they realised they were losing. 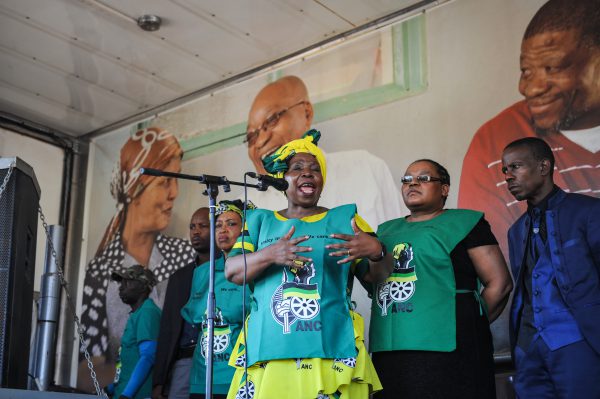 Dlamini-Zuma during the official launch of the Molo Makhelwane campaign in Hammanskraal, 5 May 2017. Picture: Jacques Nelles

This comes after Dlamini-Zuma’s proxies, who were contesting elections in the Vhembe region over the weekend collapsed the conference when they realised they were losing to Ramaphosa’s side. The conference was subsequently postponed indefinitely.

“The ANC in Limpopo can confirm that the elective conference yesterday [Saturday] in the Vhembe region was postponed indefinitely,” ANC Limpopo provincial spokesperson Khumbudzo Ntshavheni told The Citizen.

“The ANC … felt it was in the best interest of all to postpone to a date and venue still to be confirmed,” Ntshavheni said.

The contest for the Vhembe regional chairpersonship is between the incumbent, Tshitereke Matibe, and former Thulamela municipal manager Makonde Mathivha.

Matibe is believed to lead a lobby group called Psalm 23, which supports Ramaphosa, while Mathivha is said to be backing Dlamini-Zuma’s bid.

The brouhaha in the Vhembe region comes after the ANC in Limpopo is said to have planned to move its provincial elective conference from February next year to November this year, in an effort to set the tone for the national succession battle between Dlamini-Zuma and Ramaphosa at the national December conference.

Those in the know claim that the current provincial executive (PEC) divisions were not helpful to a solid Limpopo block at the national conference. The province’s premier, Stan Mathabatha, who is believed to be Ramaphosa’s lieutenant, is allegedly tipped to stand for re-election.

Limpopo will allegedly be contested by ANC bigwigs such as Joe Mathebula, Dickson Masemola, Danny Msiza and Makoma Makhurupetsa.

The Citizen understands that a highly powerful faction of ANC bigwigs, who served under the tutelage of then party provincial chairperson and premier Cassel Mathale, wants former housing MEC Soviet Lekganyane to be elected party provincial secretary on Mathabatha’s card.

But the view is said to be on a collision course with the other group comprised of PEC members lobbying for President Jacob Zuma and a first female Limpopo premier.

Makhurupetsa is currently MEC for cooperative governance, human settlements and traditional affairs and a member of the national executive committee of the ANCWL. She is reportedly seen by a sizable number of PEC members as the perfect candidate.