Malema: We don’t want to disturb the ANC while it is busy self-destructing

Julius Malema spoke 'uncensored' on Touch HD to share his thoughts on the current political situation. 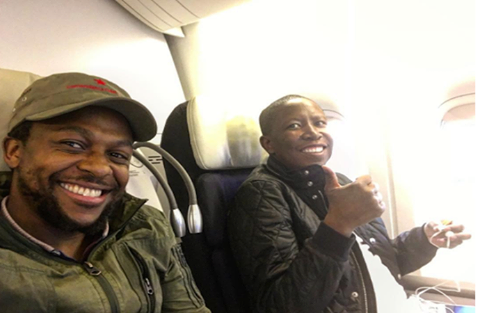 The EFF's Mbuyiseni Ndlozi and Julius Malema on their way to Cuba. Picture: Twitter

EFF leader Julius Malema, while speaking to Thabo Molefe, popularly known Tbo Touch, online station Touch HD explained that the reason he is so quiet at the moment was because he couldn’t do more to hurt the ANC than what it was currently doing to itself.

“Well, the ruling party is engaged in a programme of self-destruction. As they self-destruct, don’t disturb them. They may use you to unite. We must leave it to the ANC, this must be the ANC’s year of destruction. We will come in there when we are required to intervene”

Were the local election results an indication of things to come, Touch asked.

“They [the ANC] have reached a point of no return. Since 2016 they said they would introspect, they apologised and they said they will reorganise. They got worse and worse and it will continue so until 2019. What will happen between 2017 and 2019? There is nothing that will happen to improve the image of the ANC. The future of the country is the opposition. We have to increase our support and give the people an alternative government.”

Is he prepared to strike a deal with the ANC? Touch asked.

“You can only go back to a house which is still there. How do you go back to a house that has collapsed? There is nothing to go back to. Anyone who knows the future is bright will not look forward. ANC is not the future. The future is the EFF. That is why when we left, we did not join other parties. As we speak today, the EFF is the only intact party without internal battles

“Why were the EFF’s accounts frozen?” asked Touch.

“It was a labour dispute with one employee, they got an attachment award and they ran to the papers. The CCMA was given some taxi rank number and not our fax number. The CCMA is now dealing with the matter, as the award was given unlawfully. If you had rendered services to the EFF, I was going to say you must be paid live on air.”

On the question of land, Malema told an anecdote about Steyn City.

“We had a plan to occupy Steyn City, when I heard there is a white man who owns a huge piece of land and he has named it after himself we went to Diepsloot and the people said he looks after them, he creates employment and treats them well. I had to make a retreat because the masses said ‘not this man’.

“We are saying let the land be returned to rightful owners. And the rightful owners will say no, he is part of us and we can work with him. There can be a legislative programme because landlessness creates economic inequality. The struggle was about the land, not blue light cars and air-conditioned offices. Everybody, including the reactionary DA, is talking land. What is the most practical way to redistribute the land to people. Any party not talking land redistribution will be irrelevant.”

As for land grabs, he said: “If there’s no proper programme, land grab is the only option. For instance, we talking land occupation of the unoccupied land.

“We are beginning to say to people we can not have idle land when people are landless. Soweto and the majority of black townships are a result of occupation of land by black without authorities giving permission.”