Save SA plans to hold the Future of South Africa conference on Tuesday, Mandela Day, in association with the Ahmed Kathrada Foundation. 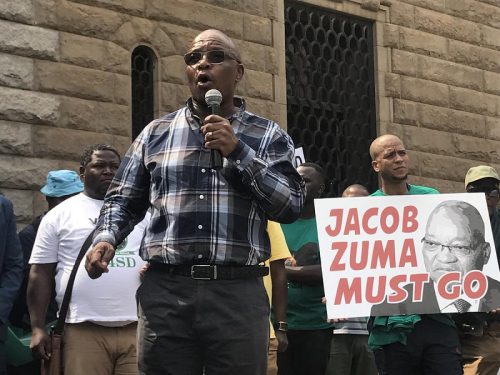 Almost one hundred civic organisations from around the country will be converging on the Rhema Bible College on Tuesday to attend the Future of South Africa conference that aims to unite and mobilise the country against state capture.

The conference is deliberately being convened by Save South Africa (SaveSA) and the Ahmed Kathrada Foundation on the 99th anniversary of Nelson Mandela’s birth. The Nelson Mandela Foundation will be attending and participating. “We have specifically chosen Mandela Day for our conference because we believe there has never been a more important time to re-emphasise Madiba’s values – including the core value of continuing the struggle for a better South Africa,” reads the press statement.

“The nation is resounding in its demand that Zuma – the primary sponsor of this state capture project – steps down as president of the country with immediate effect,” says SaveSA Chairman, Sipho Pityana. “As civil society and all the anti-state capture forces, we recognise that we must act in concert, in ways that are mutually reinforcing,” says SaveSA Chairman, Sipho Pityana.

The four hundred delegates include a number of prominent ANC politicians like Makhozi Khosa and Popo Molefe, civic organisations including the likes of Section27, Equal Education, and the Treatment Action Campaign, and union umbrellas including Fedusa and Saftu. Stalwarts of the ANC are also planning to attend, and so is the South African Communist Party, in addition to other opposition parties that will be sending delegates.

The first objective on Tuesday will be to decide on a course of action to organise protests to apply increased pressure on members of parliament (MPs) to vote for the motion of no confidence on August 8. Pityana was sympathetic to the position ANC MPs find themselves in.

“ANC MPs have been placed in a most regretful dilemma by a failure of leadership, which has resulted in them being asked to choose between the people and the party. But a position against Zuma is not a position against the ANC. He has sold the country out.”

The conference will also be used to discuss measures in which to prevent further state capture and “roll back its tentacles”.

Says Pityana: “People are sick and tired of the looting by Zuma and his cronies, and demand that it be stopped immediately. In this context, we expect the conversation at the conference to be progressive, forward-looking, and focused, and we will emerge with civil society more united than at any other time with the singular focus to stop state capture and the Zuma nightmare, and begin work on the South Africa that Madiba fought for and believed in.”