He said ‘tsotsis must go to jail and Mosebenzi Zwane is accused number one’. 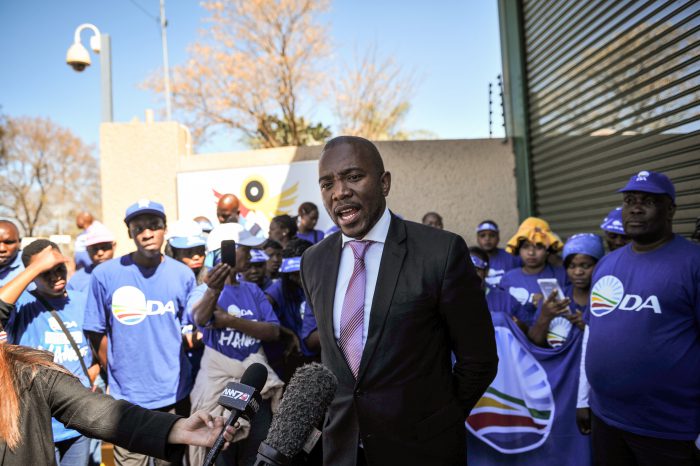 DA leader Mmusi Maimane speaks to media outside the Hawks offices after handing over a legal interdict supplementing criminal charges against the Gupta's, their associates and Minister Mosebenzi Zwane for the theft of public funds at the Estina Diary Farm in the Freestate, 24 August 2017, Pretoria. Picture: Jacques Nelles

Democratic Alliance (DA) leader Mmusi Maimane yesterday handed over a completed legal indictment to the Hawks, supplementing the criminal charges laid against several members of the Gupta family, their associates and the Minister of Mineral Resources Mosebenzi Zwane, for the theft of public funds at the Estina Dairy Farm in Vrede, Free State.

“We put this indictment together to say: now you don’t have a choice, now you must investigate. We want criminals in jail, and we want people who are corrupt in jail and this ANC that is robbing our people must also, with all those people, including Mosebenzi Zwane, go to jail. Tsotsis must go to jail and Zwane is accused number one,” Maimane said.

He was addressing a group of DA protesters outside the main gate of the Hawks offices in Silverton, Pretoria. The indictment consists of all the necessary evidence, including relevant leaked “Gupta e-mails” involving the family, Cabinet ministers and others implicated in the scandal.

“Today is a very crucial day because we are saying they must investigate. We are not playing games,” Maimane said.

The farm is a community-based private-public project intended to benefit members of the Vrede community. However, this money was allegedly used to pay for a Gupta family wedding at Sun City in 2013.

“They are not just stealing money, they are oppressing our people. What is worse is that when you open a charge, as my colleague did, they don’t investigate,” Maimane said.

Maimane was joined by DA shadow minister for justice Glynnis Breytenbach, who said the indictment also contained all the invoices and bookings for the wedding of the Guptas’ niece, worth R30 million, chocolates for their guests for R20 000 and gifts bought for R175 000.

“The indictment also contains information that makes this an offence internationally. The United Kingdom, for instance, has jurisdiction and what Mr Maimane is going to do is to send this to the United Kingdom and tell them they also have an interest here. Standard Chartered Bank has an interest in what Standard Chartered Bank in Dubai does and money laundering is a cross-border international offence,” said Breytenbach.

Hawks spokesperson Lieutenant-Colonel Robert Netshiunda said they were busy with investigations. “We can’t say how far the investigation is. We must follow all the steps and procedures,” he said.

He said the Hawks were not worried any of the subjects of the investigation will flee to avoid prosecution. “If someone who has been implicated in the case flees the country, we have means to bring that person back unless that country is not part of Interpol,” he said. – virginiak@citizen.co.za