The cops have been trained to use bicycles in the most difficult situations and even to help arrest suspects. 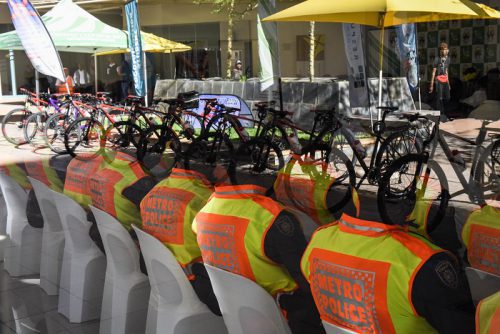 Metro police officers are seen at a shopping centre in Hatfield during the launch of a new TMPD bicycle unit, 13 September 2017, Pretoria. Picture: Jacques Nelles

Criminals targeting students from the University of Pretoria are warned to either run now or get caught by the new Tshwane Metro Police Department (TMPD) bicycle unit.

The unit consists of 20 members who will be working two shifts a day. It was launched yesterday in partnership with various businesses in the area, as well as the university and the Blue Bulls Company.

TMPD officer Tandeka Leshaba said they are well trained and ready for action.

“We are not scared of the criminals and we want to make sure this is the safest city in Gauteng,” Leshaba said.

She warned that while criminals might think they can outrun the bicycles, the cops have been trained to manoeuvre them in the most difficult situations and even use them to help arrest suspects.

MMC for community safety Alderman Derrick Kissoonduth said Hatfield is densely populated with students, owing to the university, hence the high number of robberies and thefts targeted at them.

“Surely we cannot have a situation where our students are condemned to a life of fear and victimisation,” Kissoonduth said.

According to students’ representative council president Kwena Moloto, muggings and cars being stolen are the biggest issues.

“Over the past few years, student-targeted crime has increased. We are glad to see that the DA-led city of Tshwane is taking the issues of students seriously and is putting the students first,” Moloto said.

Blue Bulls Company CEO Barend van Graan said their partnership with the bicycle unit is their small contribution towards keeping the city clean and safe.

“We think this is a great initiative and we are happy to be part of it.”

Tshwane mayor Solly Msimanga said crime drives away investment and that is why it is a priority for him to fight it to the point where everybody can feel safe in the capital.

“With the help of CCTV cameras, to be installed in due course, the move is expected to reduce the high number of thefts and robberies prominent in the area,” Msimanga said. – virginiak@citizen.co.za