The minister believes she has done nothing wrong, and accuses the director-general of being ‘strategically malicious’. 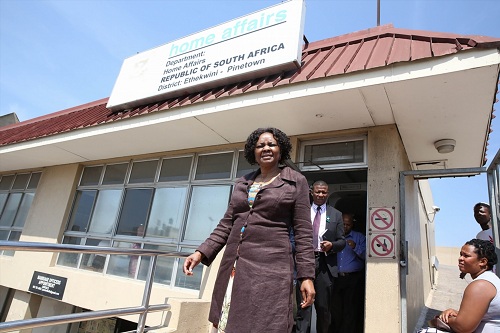 Home Affairs Minister Hlengiwe Mkhize during her visit at the Pinetown office of her department on September 19, 2017 in Pinetown, South Africa. (Photo by Gallo Images / The Times / Thuli Dlamini)

Home Affairs Minister Hlengiwe Mkhize has hit back at allegations that she asked her department’s suspended director-general, Mkuseli Apleni, to settle a number of cases against the department, including one involving her son’s company, as well as another worth R300 million.

In an interview with eNCA on Thursday morning, the minister said Apleni was “unstable and delusional” for making the claims.

“He has taken things to extremes because normally there are prescripts as to how you deal with conflict, and also [he is] a little bit delusional,” Mkhize said.

“For instance, some of the cases I am reading about, I say it is malicious to believe that he and he alone could resolve cases that affect different organs of government. I say this guy has gone crazy. How can I expect him to do that?”

On Wednesday, Apleni filed an urgent application to the High Court in Pretoria to declare his precautionary suspension on September 18 invalid and unlawful. He argues the process followed in suspending him was procedurally unfair, and wants the court to hear his case on October 3.

In court papers, the home affairs DG alleged the minister’s son was abusing his relationship with her mother to bypass legal processes over the dispute involving almost R1 million, but Mkhize has rubbished the claims.

“There was no expectation for him to do anything and to throw around a company name in a reckless and irresponsible manner. I think he wants to share his pension with many people,” she told the broadcaster.

Mkhize believes she has done nothing wrong, and had no ulterior motives in suspending Apleni. She has accused him of being “strategically malicious” and being “almost pathological”.

“He is unstable because he is distorting things … he can’t choose and say she wanted me to settle. That’s why I am saying it is like I am dealing with somebody almost pathological and unstable,” said Mkhize.

“You can’t choose and be selective when presenting matters,” she added.