WATCH: EFF refuses to be addressed by a ‘small, criminal Gupta stooge boy’

Describing Gigaba as a state capture conduit, the EFF left the House in protest half-an-hour later in protest. A move Mbete welcomed. 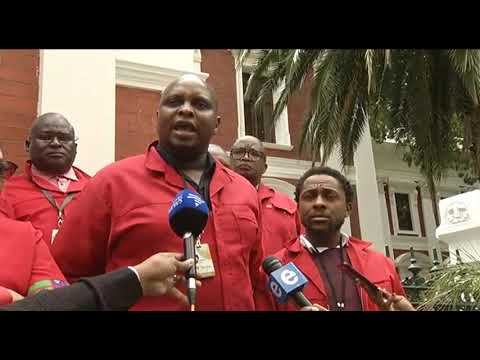 Finance Minister Malusi Gigaba’s maiden mid-term policy statement got off to a rocky start in parliament yesterday. If the EFF had had its way, he wouldn’t have been allowed to address parliament.

Quick on the uptake was the red berets’ national spokesperson and recent PhD graduate, Mbuyiseni Ndlozi. He rose on a point of order to suggest Gigaba’s alleged role as a state capture fixer precluded him from addressing the House.

“Thank you, speaker. I want to rise with all earnestness and due respect. We have a big problem in that we cannot be seen to be compliant and corroborating with crime,” he addressed speaker Baleka Mbete.

Mbete’s stern tone indicated she might have been anticipating the fighters’ objection to Gigaba delivering the policy statement. 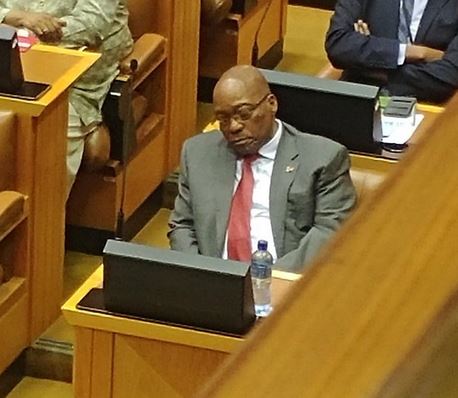 “Honourable member, what is your point on which you are rising?” she asked.

Ndlozi cited Rule 92, and insisted: “We can’t allow Mr Gigaba to address parliament because he is the sole reason why we have state of capture in South Africa.” Mbete ordered him to take a seat.

“He is the one who handed all state institutions [to the Guptas]. Parliament can not be seen to legitimise what is essentially a Gupta stooge. He is an extension of Mr Zuma in Treasury. Let’s not be associated with criminals. Gigaba is a criminal,” he continued

At this point, Mbete called for Parliament’s serjeant-at-arms  to “assist” Ndlozi to leave the chamber. The EFF chief whip argued that Mbete was abusing her powers.

“In terms of the rules, you don’t enforce rules in that way. We can’t allow a Gupta boy to address this house. There is a simple issue that we are requesting. We can’t be addressed by this small boy from a corrupt family,” Shivambu said.

Mebete then told Shivambu he himself would have to follow Ndlozi, saying Shivambu could not rise and instruct a member of the House to stop delivering a speech, as he had no such powers.

“This is what is going to happen. We are giving a way forward now. We are going to leave you to continue with your corruption and listening to a corrupt person. We are not going to form part of this nonsense of a captured soul called Malusi Gigaba, who has surrendered our companies. He is going to sell Telkom today,” Shivambu offered.

Mbete remained unfazed: “We welcome you leaving the House.”

“He is going to finish off this country because of the corruption that is presided over by Jacob Zuma and the Guptas,” Shivambu said, and led the berets in a mass walkout.

EFF deputy secretary-general Hlengiwe Maxon Hlophe shouted that Gigba was a “Gupta puppet”, while another EFF MP, Makoti Khawula, said parliament was not Mbete’s house, and quipped: “Salani na masela lawa [you can remain behind with those thugs].”

Watch the exchange below: