EFF views DA like a rebound girlfriend, until it finds a real lover – Malema

He accused the DA of supporting 'apartheid Israel'. 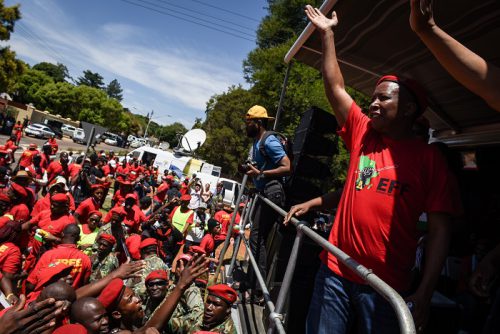 EFF leader Julius Malema waves to the gathered crowd outside the Israeli embassy in Pretoria, members of the EFF gathered to protest the Israel government and Apartheid against Palestinians, 2 November 2017, Pretoria. Picture: Jacques Nelles

The coalition between the Democratic Alliance (DA) and the Economic Freedom Fighters (EFF) was a “marriage of convenience”, EFF leader Julius Malema reminded members yesterday.

The EFF was viewing the DA like a “rebound girlfriend” until the red berets found the “real lover”, he said.

The EFF commander-in-chief was addressing about 500 party members during a picket outside the Israeli embassy in Pretoria yesterday in solidarity with Palestinians “oppressed by apartheid Israel”.

The picket marked the centenary of the Balfour Declaration, a public statement by the British government in 1917 supporting the establishment of a home for Jews in Palestine.

Malema accused the DA of supporting Israel’s “ideological orientation” and told EFF members not to see the political arrangement with the party as synonymous with support for Israel.

“Our vote with the DA does not mean we support their ideological orientation,” he said to a cheering crowd.

“The DA is like … this person you date after breaking up with your genuine girlfriend … the DA is a rebound. We will meet the real lover. We are passing time. The DA represents apartheid Israel. We are not confused by that.

“But we have a problem with these criminals called the ANC who are stealing directly without shame. That is why we say in the meantime let us stay here [with the DA] while we look for a permanent solution to the crisis of South Africa.”

He slammed the recent #BlackMonday protests against farm killings, criticising police and their “loudmouth minister” for not enforcing the law when farmers blocked roads and highways in Tshwane this week.

“What is even worse is that the police are so scared of white people. Instead of shooting at them with rubber bullets, they took the phones of white people to shoot pictures of them while they were disrupting the City of Tshwane.

“If we start misbehaving here, the police won’t even fire a warning shot because these blacks were trained by apartheid to suffer from black hate.

“Even their loudmouth minister did not instruct them to shoot at these racists, who were blocking our roads and stopping our children from going to write their matric examinations.

“The useless Tshwane police did not do anything against racism even though they saw it on Monday. All of us must respect the law.”