Armed private security could be seen milling inside the school’s premises. A police officer stands in front of a line of parents outside Hoerskool Overvaal in Vereeneging on 18 January 2018. Members of the ANC, EFF and parents protested outside the school due to a court ruling supporting the school not include English First Language students this year as it is an Afrikaans school. Picture. The protest turned violent, with police using stun grenades and rubber bullets to disperse the protesters. Yeshiel Panchia

Several South African Police Service officers stood guard at the main entrance of the troubled Afrikaans Hoërskool Overvaal school in Vereeniging on Friday morning, as tensions continue to simmer over the “exclusion” of non-Afrikaans speaking learners from the school.

An armoured personnel carrier police vehicle, popularly known as a Nyala, was stationed at the closed entrance of the school, with armed police around it. A police water cannon was also parked near the school entrance. Armed private security could also be seen milling inside the school’s premises while ambulances and paramedics were also at the scene.

A crowd of parents who have learners at the school congregated on one side, while members of the ruling African National Congress, who have protested in support of the excluded children, were gathering on the other side.

On Thursday, a SAPS van stationed at the school was set alight, as community members continued to protest against the school’s “exclusion” of non-Afrikaans speaking learners.

Up to then, the situation had been tense, but calm on Thursday, when the marked SAPS Nissan Hardbody double-cab was suddenly on fire. The fire was quickly extinguished before it could cause extensive damage.

Police officers, pointing pistols and shotguns, then rushed to arrest groups of Congress of South African Students (COSAS) members who had been protesting at the school. There were skirmishes as most of the detained people said they had had no involvement in the arson attack.

VIDEOS: Protesters refuse to back down as violence continues at Hoërskool Overvaal 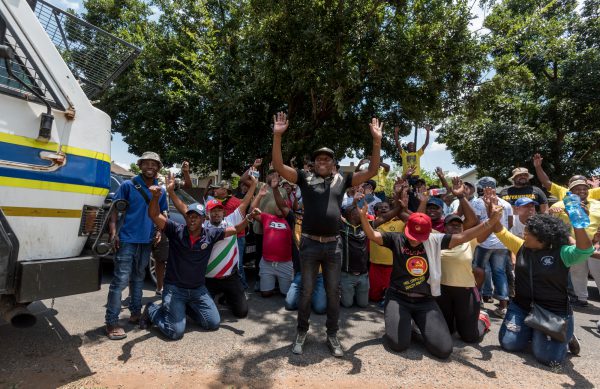