The driver was immediately arrested for drunk and negligent driving. He was taken to hospital and admitted under police guard. 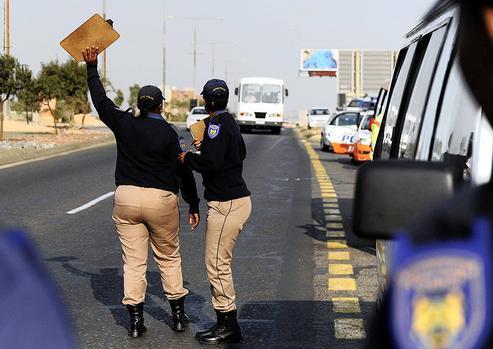 Metro Cops at a roadblock. For illustrative purposes. Picture: ANA

Two Tshwane metro police (TMPD) officers suffered injuries when they were knocked over by a drunk driver, after they had stopped a speeding motorist.

The officers had pulled over a driver for driving above the speed limit on the N1 and the Old Johannesburg Road in the early hours of Sunday morning, TMPD spokesperson Senior Superintendent Isaac Mahamba said.

But while they were attending to the speeding driver, they were hit by another car from behind, he said.

“Both officers sustained injuries and were rushed to hospital. When the driver who hit them was tested for alcohol, it was found to be way above the limit.”

The driver was immediately arrested for drunk and negligent driving. He was taken to hospital and admitted under police guard.

The officers are stable and one was discharged from hospital.

“It is with great disappointment that there are people who still refuse to hear messages sent through our road safety campaigns regarding drinking and driving and abiding by the rules of the road that are conducted throughout Tshwane.”

“However, TMPD will continue with road safety awareness campaigns that are aimed at reducing road fatalities and to enforce the law on those that break the rules of the road,” Mahamba said.

Still no mercy for 'cabbage bandit', despite public outcry
1 month ago
1 month ago
PREMIUM!

Still no mercy for 'cabbage bandit', despite public outcry
1 month ago
1 month ago
PREMIUM!