Community members say the raising of the flag for the first time ever next to the national flag is a milestone for the continent.

The raising of a lesbian, gay, bisexual, transgender and queer (LGBTQ) flag at the Tshwane City Hall on Human Rights Day illustrates significant progress made in the stride towards equality and nondiscrimination in society.

The LGBTQ community yesterday witnessed in silence the flag being raised for the first time next to South Africa’s national flag.

Once raised, community members cheered loudly, adding that this was also a milestone not just in South Africa, but on the entire African continent. Labelz, a drag artist, is seen addressing members and supporters of the LGBTQ communities outside the Pretoria City Hall on 21 March 2018. Picture: Jacques Nelles

Zack Mbhele, DA shadow minister of police who is an openly gay member of parliament, said he was proud at the sight of the flag.

“LGBTQ rights are human rights too – but the rights of the LGBTQ people have been violated because of prejudice and homophobia,” he said.

Mbhele said there was significant underreporting of various crimes because gay people fear secondary victimisation once they go to police. There, they are further harassed, he said. Hendrik Baird, station manager of Africa’s only online LGBTQ community radio, GaySA, saluted all who were brave and “spoke up” for change.

“My hero is a man called Simon Nkoli, who was instrumental in organising the first pride march and who was part of one of the first gay and lesbian organisations in the country. He bravely fought for change and we must forever honour him as the architect of our freedom,” Baird said.

Baird was born in the early 1960s, when homosexuality was considered a crime, and remembered the 1970s when people were thrown into prison for being gay.

“I grew up in a repressed society at a time when men ruled and women were consigned to the kitchen. Today, we still have many problems. Too many lesbian women are raped and murdered and too many gender nonconforming men are attacked, spat at and humiliated,” he said.

Petro Africa, a Pretoria resident, said it was a moment to celebrate his sexuality.

“The responsibility lies with us gay people to be more visible. Too many gay people are still hiding. The more people see us out there, the more they will become used to our presence. People fear the unknown and change, so it is up to us to be visible and show them that we are also human beings,” Africa said. 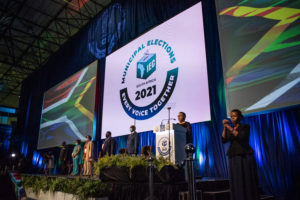