We will stick to occupying land, EFF tells Msimanga

This came after the Tshwane mayor spoke out strongly against land invasions in his second state of the capital address yesterday in Pretoria. 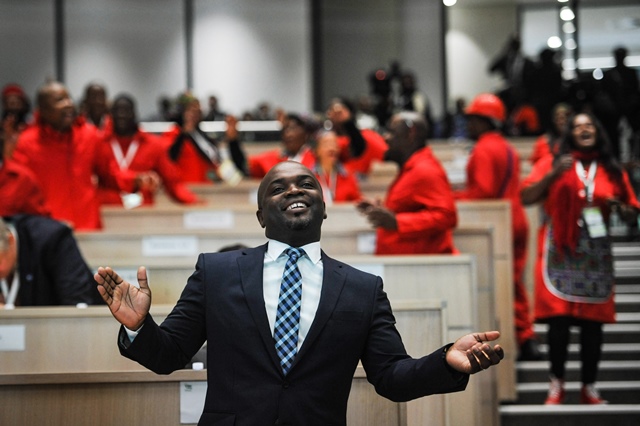 Tshwane Mayor, Solly Msimanga sings and dances along with the EFF before going ahead with the State of the Capitol Address, Tshwane House, Pretoria. Picture: Jacques Nelles

After Msimanga’s second state of the capital address yesterday in Pretoria, in which he spoke out against land invaders, EFF leader Benjamin Disoloane said: “As the EFF, we are encouraging our people to use land that is not being utilised. We are not saying they should grab land. The community is occupying it and we support that.”

In his address, Msimanga said he had noted the “worrying threats” from a group in Olievenhoutbosch who have refused to vacate illegally occupied houses which were intended for the Mooiplaats community.

“To this we say: law and order must always be upheld. In light of this, we encourage our people to not allow themselves to be used as political pawns to further the agendas of political parties that do not always have their best interests at heart,” he said, as the ANC councillors all pointed in the direction of the EFF caucus.

But Disoloane said the party would continue to support people who invade and occupy land and vacant spaces in the capital. He slammed Msimanga for projecting such people as thieves, adding that they were not stealing the land.

“The mayor should stop reducing our people by making out they are stealing the land,” he said. “He must come up with alternatives to make sure our people have places for residential and economic purposes.”

Olievenhoutbosch has been gripped by a spate of illegal land occupations, which were condemned by President Cyril Ramaphosa on a visit to the area last month.

The ongoing invasions prompted an urgent meeting between residents, Gauteng Premier David Makhura and Msimanga, who told Mooiplaas residents the city would ensure they move from the informal settlement to Olievenhoutbosch Extension 27.

But the current residents will be opposing the eviction from the illegally occupied RDP houses before the High Court in Pretoria on May 23.

The Gauteng department of human settlements approached the court this week to get an order to remove the invaders as the area is earmarked for building low-cost houses. “Our approach seeks to make people real home owners and protects their right to build assets and wealth and hand these over to their children,” Msimanga said.