Stormers grind out a deserved victory at Newlands

The Stormers scored only their fourth win of the season in 10 starts, but missed getting a bonus point after a tough Rebels fight-back. 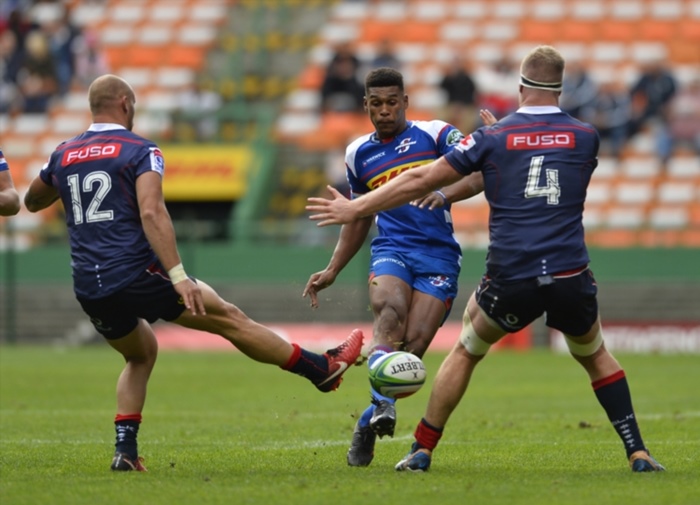 Damian Willemse of the Stormers kick the ball between two Rebels players during their Super Rugby match at Newlands on April 27, 2018 in Cape Town. Picture: Gallo Images

The Stormers ensured they got back to winning ways with a grinding 34-18 Super Rugby win over a very confrontational and niggling Rebels outfit at Newlands on Friday afternoon.

Scoring four tries to two and coming back from three derby losses away from home, the Stormers scored only their fourth win of the season in 10 starts, all coming at Newlands, and lead 17-6 at the break, but certainly didn’t have it all their way in the second half. Marika Koroibete of the Rebels is tackled by JJ Engelbrecht of the Stormers during the Super Rugby match between DHL Stormers and Rebels at DHL Newlands Stadium on April 27, 2018 in Cape Town. Picture: Gallo Images

A late 81st minute try by Stormers wing JJ Engelbrecht, his second of the match, gave some substance to the final scoreline, but in the second half the Stormers had to pull out all the stops to keep the pressing Rebels out.

Scoring their third try by fullback Dillyn Leyds four minutes after the break to go into a 24-6 lead, the Rebels came storming back with two tries by powerful wing Seva Naivalu in the 53rd and 75th minutes to narrow matters and also depriving the Stormers of a valuable bonus point.

Key Player of the game

Stormers lock Pieter-Steph du Toit could very soon be pushing to be under the three top locks in world rugby in another storming display while he also provides a great option at seven and once again he was in the thick of the tight exchanges or taken the ball up as a ball-carrier while his lineout abilities are beyond doubt. Steven Kitshoff of the Stormers during the Super Rugby match between DHL Stormers and Rebels at DHL Newlands Stadium on April 27, 2018 in Cape Town. Picture by Gallo Images Dillyn Leyds of the Stormers, second from right, celebrate with teammates after scoring a try during the Super Rugby match between DHL Stormers and Rebels at DHL Newlands Stadium on April 27, 2018 in Cape Town. Picture: Gallo Images