Sentences not the end of the Poppie abuse saga

The Go Purple Foundation plans to investigate and prosecute seven people in Orania who all 'turned a blind eye' to the abuse of the little girl. 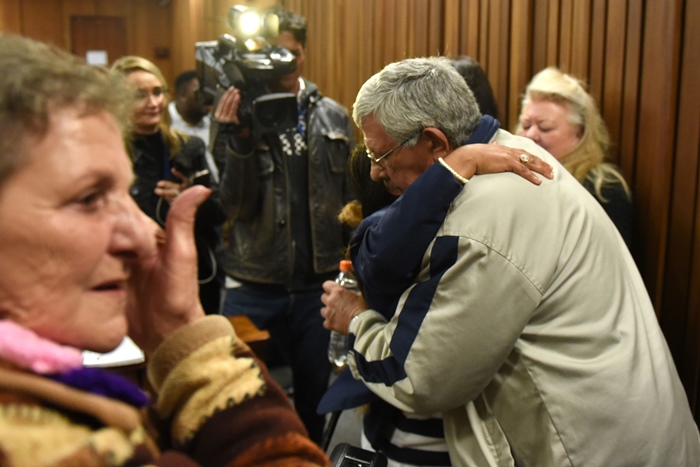 The saga of Poppie van der Merwe, who was brutally beaten, abused and finally murdered by her “evil” mother and stepfather in the “intimate safety of their home”, will not end with the life-long prison sentences her murderers received yesterday.

Judge Bert Bam sentenced Louisa Koekemoer, 47, and her husband Kobus Koekemoer, 44, to life imprisonment in the High Court in Pretoria for Poppie’s murder. He also sentenced them to a further 10 years each in prison on two counts of child abuse.

He said the Koekemoers were inherently evil as they had abused the toddler, who died aged three, for eight months before her death.

But Annari du Plessis from the Go Purple Foundation, which supports the victims of molestation, rape and abuse, said the foundation would now go after seven people in Orania who all allegedly turned a blind eye to the abuse of Poppie.

“These seven people include a pastor, a doctor, two teachers at a crèche and a neighbour who witnessed how Poppie (and another boy) were hosed down in the middle of the freezing cold winter and left outside,” Du Plessis said.

She said they would be starting this investigation for the second time after Hopetown police informed them that the National Prosecuting Authority was not going to prosecute the seven.

“We now have a private investigator on board and we will share all our information with the police in order to bring these people to book,” Du Plessis said.

She has since received two letters warning her to drop the case.

Yesterday, Judge Bam said the abuse of children was a very serious matter and more so if the children were of a tender age.

“It has become a common phenomenon that people kill each other and children. Child abuse cannot be tolerated and condoned in any society and in my view perpetrators must be removed from society for a very long time,” he said.

Bam said that despite the severe sentences courts were handing down, abuse seemed to be on the increase. He added that he was not convinced that Louisa Koekemoer could be rehabilitated at the age of 47.

Bam found that both the Koekemoers showed very little remorse and that many questions remained unanswered.

“How can a mother and father do this to a child?” he said during sentencing.

Poppie died of severe head injuries caused by blunt force trauma. She was dead by the time she was taken to hospital. She had old and new injuries all over her body and her hair had been shorn to the skin.

Carla van der Merwe, Poppie’s grandmother, burst into tears of joy on hearing the sentence. She hugged the investigating officer, sergeant Gift Motome, in thanks for his hard work during the investigation of her granddaughter’s murder and abuse.

“I am happy about the sentence, but it won’t bring Poppie back. I am happy they are going to jail for a long time,” she said.

Asked how he felt, Motome flashed a big smile, saying: “I am happy”.

Hilton Hofmyer, who had been travelling regularly from Bronkhorstspruit to attend the trial, was crying as he stood outside the court holding a picture of Poppie.

When Kobus Koekemoer’s lawyer came out, he took his hand and said: “Thank you for doing a great job in losing this case.”

The lawyer laughed and said “thank you”.