Ouma Theresa Francis Mooloo claims she is 109 years old, which makes her the oldest resident of Eersterus in Tshwane. 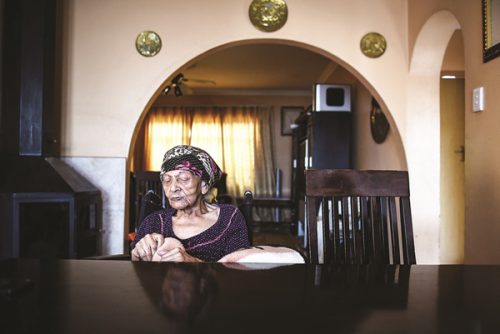 Theresa Francis Mooloo of Eersterust, whose ID document indicates she is 104 years old. But Theresa disagrees, saying her birth certificate was only issued eight years after she was born, making her 109 and the oldest resident in Eersterust. Picture: Jacques Nelles

She was eight when the apartheid police and the department of home affairs came around to their farmhouse, counted all the children and wrote out their very first birth certificates.

But Theresa Francis Mooloo, or ouma Mooloo, as she is known in Eersterust, east of Pretoria, has always maintained that her birthdate was wrong. She says she was born eight years before the date on her identity document and the only thing that was right is the month and day on her ID.

According to her ID, she was born on June 29, 1914, but she said that was the same day they came to write out their birth certificates.

Ouma Mooloo also refused to be told she is old and said: “I am still young.”

She said while she smoked during the ’80s, she never drank alcohol and she respected her grandmother who brought her up because her mother died at a young age.

She talks nonstop and sometimes completely forgets in which decade she lives and reminisces about the ’70s, ’80s and ’90s.

She would speak to her children as if they are children but when it comes to her husband her entire face lights up.

“Oooooh that was a very handsome boyfriend of mine. He was very attractive, even if I have to say so myself,” she said.

“I loved him very much and when the women would look at him, I would growl at them,” she said with mysterious smile.

And then she said his name, “Papul Mooloo”, a couple of times.

“Oh, but I was always a pretty girl, and I’m still a pretty girl,” she said, chatting away about her past and talking about people long dead.

Then she starts talking about her love for sweets, chocolates and meat. “I love steaks and chops,” she said, licking over her lips. “Ouma doesn’t even have teeth, but she wants her meat every day.”