No fewer than 10 police generals are accused of corruption amounting to billions, and at least 27 crime intelligence members are also facing charges. 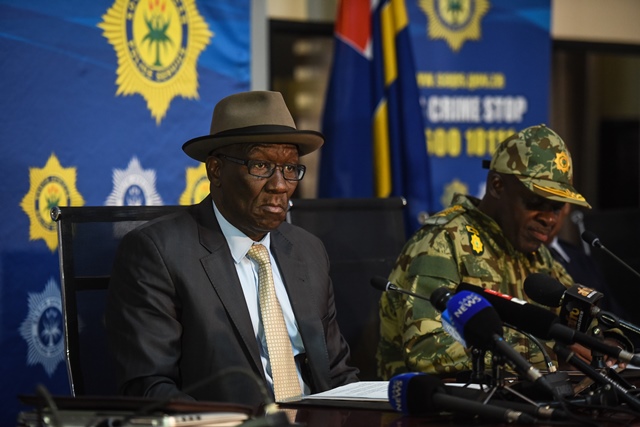 The national police commissioner and his political head talked tough on crime yesterday, while admitting that they also faced some serious questions within their own ranks, as several senior members of the South African Police Service (SAPS) are under investigation for crimes.

National police commissioner General Khehla Sitole said their main focus in fighting serious crimes, such as cash-in-transit robberies, hijackings, house robberies and taxi and gang violence, was to disarm the criminals and respond to scenes in record time.

But, Sitole said, no police officer was above the law and all officers who were guilty of any crime would be flushed out of the service.

The Independent Police Investigative Directorate (Ipid) is making headway in its investigations into 10 police generals who are accused of corruption amounting to billions of rands.

Sitole said the SAPS was also initiating its own investigations and suspended two lieutenant-generals in recent weeks.

It also recently came to light that at least 27 members of the police’s crime intelligence service are facing charges for infractions ranging from traffic violations to serious criminal offences.

Police Minister Bheki Cele said the days of police officials sitting behind desks had come to an end, as they would now be deployed to identified crime hot spots countrywide. Their focus would be on combating serious crimes such as cash-in-transit heists, car hijackings, murders, house robberies, and gang violence.

As part of the reaction plan, an aeroplane for the Directorate for Priority Crime Investigation (the Hawks) plus another plane, all police helicopters, and 122 high-powered vehicles would be on standby for operations.

“We have also beefed up the 10111 hotline with new technology to be quick in receiving the messages and to respond,” Sitole said.

On ANC secretary-general Ace Magashule’s recent claim that KwaZulu-Natal’s spate of political killings were merely the result of criminality, Cele said the report on the killings was not satisfactory at all.

“There is a long list of dead people and a short list – if it exists – of culprits who have been arrested and put in prison.”

He said no more than four people had been put behind bars for the more than 40 people who had been killed to date.

“It is not just political killings, it is crime related,” Cele, however, confirmed.

ALSO READ: Spy cops have records ‘as they are forced into crime’