Residents have echoed sentiments of fear and insecurity after the alleged attacks. Children in the area do not attend school out of fear for their safety. Group editor of the Rising Sun, Vivaga Thambiran speaks to Githa Ramnarain, a pioneer resident, after her home was petrol-bombed over the weekend.

An alleged land invasion threat has gripped the close-knit community of Seven Tanks in KwaZulu-Natal after several reported incidents of violence, including a petrol bomb attack, Rising Sun Chatsworth reports.

Githa Ramnarain, 71, a pioneer resident in the area, said: “We have been targeted and fear for our lives. On Sunday night, I heard a loud noise, and we realised thereafter that our home was on fire.”

READ MORE: Why the KZN government will not be taking back land from traditional leaders

“All the necessary authorities came to the area, and the situation was under control. We were told that we have to move out, however, we have nowhere to go. All of us living in Seven Tanks have been born here. Now, during our golden years, we have to pack up our belongings and flee our homes,” Ramnarain said.

Other residents echoed the same sentiments of fear and insecurity after the attack, and children in the area did not attend school out of fear for their safety.

Chairman of the Silverglen Conservancy, Shaun Hammond, said he was working closely with the eThekwini natural resources department, the Land Invasion Unit, Metro Police and Bayview SAPS, constantly monitoring the volatile situation in the nature reserve and alleged attacks on residents of Seven Tanks. 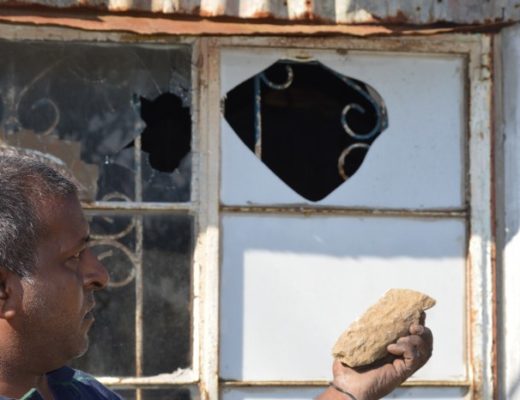 A resident holds a rock in his hand, which was thrown through his window.

“Over 1 000 land invaders entered the reserve and attacked the Land Invasion Unit by throwing stones. They were armed with bush knives,” he explained.

Hammond added: “The land grabbers hold regular meetings and constantly enter the protected reserve, cutting down and destroying numerous protected species of trees and grass and plants. Over the weekend, they set part of the reserve alight and killed animals which live in the reserve.”

In 2014, a large number of families who lived in Seven Tanks, situated inside the Silverglen Nature Reserve and within close proximity to the Umlazi, were forced to abandon their homes and the land they farmed for more than 150 years, after being terrorised by criminals, even in broad daylight.

They claim they were promised relocation by the authorities who attended to the attacks, however, nothing prevailed and the empty promises faded with the threats.

“We thank the eThekwini Land Invasion Unit, Area Based Management, Metro Police and the Bayview SAPS for their support in rescuing the reserve from destructive land invaders,” Hammond added.