The BLF leader says no court will stop the organisation from defending itself against 'settlers'. 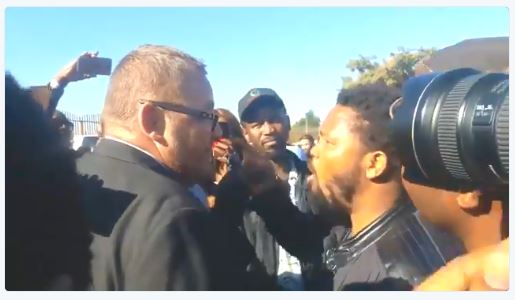 A fracas flared up outside the Randburg Magistrates’ Court between members of the Black First Land First (BLF) and AfriForum’s Kallie Kriel following Duduzane Zuma’s appearance on two counts of culpable homicide.

Former president Jacob Zuma’s son faces two charges of culpable homicide in connection with a 2014 car crash as well as an alternative charge of negligent driving.

The National Prosecuting Authority (NPA) reviewed its decision to charge the young Zuma after AfriForum sought to privately prosecute him.

Kriel reportedly questioned where BLF was getting its funding and whether the organisation was still part of the Gupta cabal. BLF members shouted at the AfriForum leader, calling him a racist who should go back to Holland.

Kriel told reporters the lobby group would not be intimidated by racists such as the BLF, but would continue supporting the family of the deceased.

BLF leader Andile Mngxitama told journalist that no court would stop it from defending itself against “settlers”.

BLF alleged the case against Duduzane Zuma was politically motivated and intended as an attack on his father.

The former president’s son appeared in ankle chains at the Johannesburg Specialised Commercial Crimes Court on Monday for his corruption charge, which Mngxitama said was a form of intimidation.

The BLF leader called on the media to stop being biased, saying supporters of radical economic transformation (RET), such as the organisation itself, former president Zuma, former SABC COO Hlaudi Motsoeneng, former SAA board chairperson Dudu Myeni and former Eskom CEO Brian Molefe, were being demonised by the media.

“You can’t allow the continuation of injustice in your presence – report the truth!” Mngxitama said.

He reportedly claimed that Zuma’s successor, President Cyril Ramaphosa, was complicit in the alleged politically motivated ploy against the Zuma family.

Another BLF member told journalists that the country’s judiciary, just like the media, was being used to lynch the Zuma family and backers of RET.

The BLF member said AfriForum had not sought to privately prosecute the young Zuma because the group cared for the family of the deceased, but rather because it sought to sow divisions among black people.

A poster with the traditional ANC colours calling for ‘Freedom for Duduzane’ was doing the rounds on social media ahead of Duduzane’s court appearance. The poster sought to urge people to show support for the young businessman at his court appearance. Watch more videos of the clash between Kriel and BLF: